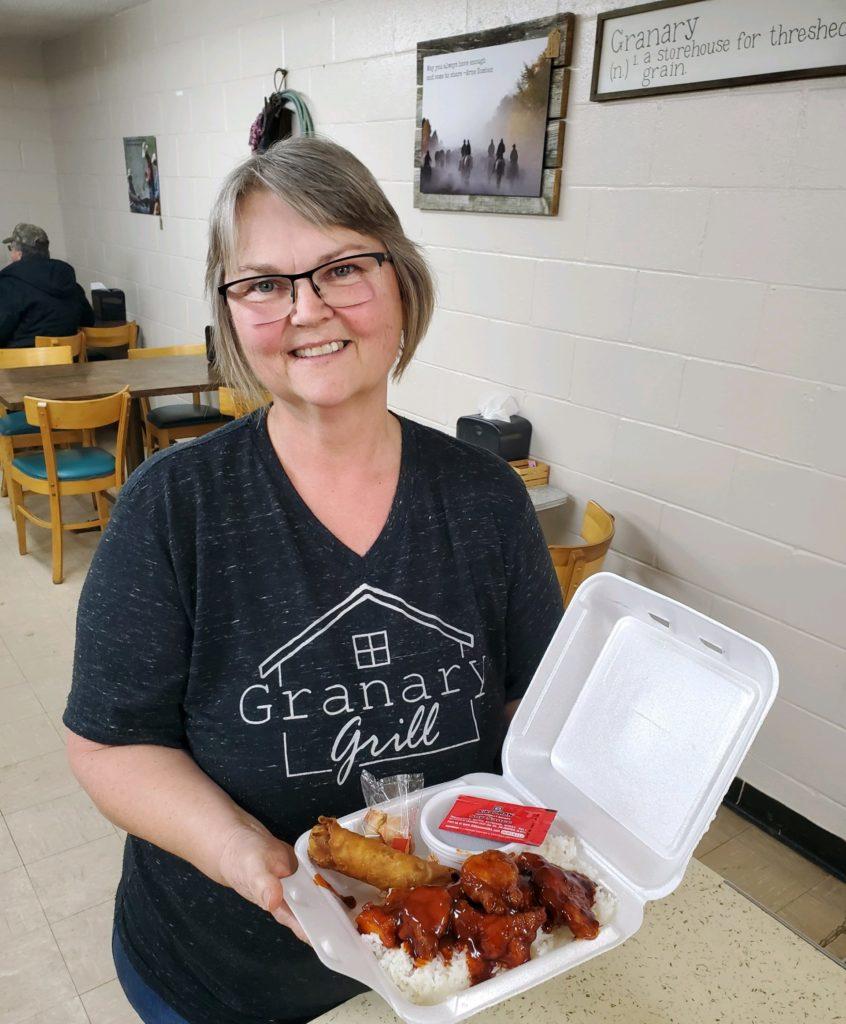 Kimberly Lemieux operates a Chinese take-out service each Monday from an unlikely place, the Granary Grill inside Rugby Livestock Auction. She is shown here with an order of General Tso’s Chicken. [Photo: Kim Fundingsland/The Dakotan]

Kimberly Lemieux operates a Chinese take-out service each Monday from an unlikely place, the Granary Grill inside Rugby Livestock Auction. She is shown here with an order of General Tso’s Chicken. [Photo: Kim Fundingsland/The Dakotan]

Serving Chinese from a Livestock Barn

RUGBY–It is out of the ordinary. No question about that. And people love it.

Monday nights have been surprisingly busy at the Rugby Livestock Auction. Not for a parade of livestock presented to potential buyers, but for Chinese food.

“Every Monday night you can order Chinese take-out from the livestock barn.” Laurie Odden, Chamber of Commerce director

“It’s a little gem. Every Monday night you can order Chinese take-out from the livestock barn,” said Laurie Odden, Chamber of Commerce director. “I just had some amazing shrimp-fried rice for supper.”

Welcome to small town North Dakota. The idea for Chinese take-out came from Kimberly Lemieux. She’s been operating the Granary Grill inside Rugby Livestock since August of 2019, open for business only on sale days in the auction ring. Generally, one or two days a week.

“Unless there is a special sale,” said Lemieux.

During those sales the Granary Grill offers customers a menu of familiar items you would expect – hamburgers, chicken strips, salads, a meat and potato meal with a vegetable and dessert.

When action at Rugby Livestock slowed this past fall, Lemieux said she was looking for ways to supplement her income. What she came up with was to offer Chinese take-out, from the livestock barn, on Monday nights. Lemieux reasoned she was there anyway following a sale day for calves.

“The restaurants here close at five on Monday,” explained Lemieux. "I’m here. Why not add something? Nobody has Chinese. I thought I’d try it.”

Lemieux opened her Chinese take-out only business in mid-September of 2021, uncertain what the response would be. Her anxiousness was quickly quelled.

“The first night she had over 100 orders in little Rugby, North Dakota. It was crazy,” remarked Odden. “She’s found a little niche.”

“I was amazed. I had no clue. I thought I could send my staff home but that wasn’t going to happen,” said Lemieux.

Demand for Lemieux’s Chinese dishes has continued since that remarkably busy opener. She says she still fills 50-100 take-out orders every Monday.

“Customers call or text that they want it. We bag it, and they come in." Kimberly Lemieux, Granary Grill owner

Lemieux says her customers cover all age groups and says 99% are not customers she serves during sale days when the Granary Grill is open.

“I think I really picked up a nice addition to my community,” said Lemieux. “I’ve been really pleased.”

Judging by the number of take-out meals being ordered from a most unlikely place, so too are her customers.

No Go for Ag-gag Law

Home on the Road

Smoothing Your Life with Blissful Bee