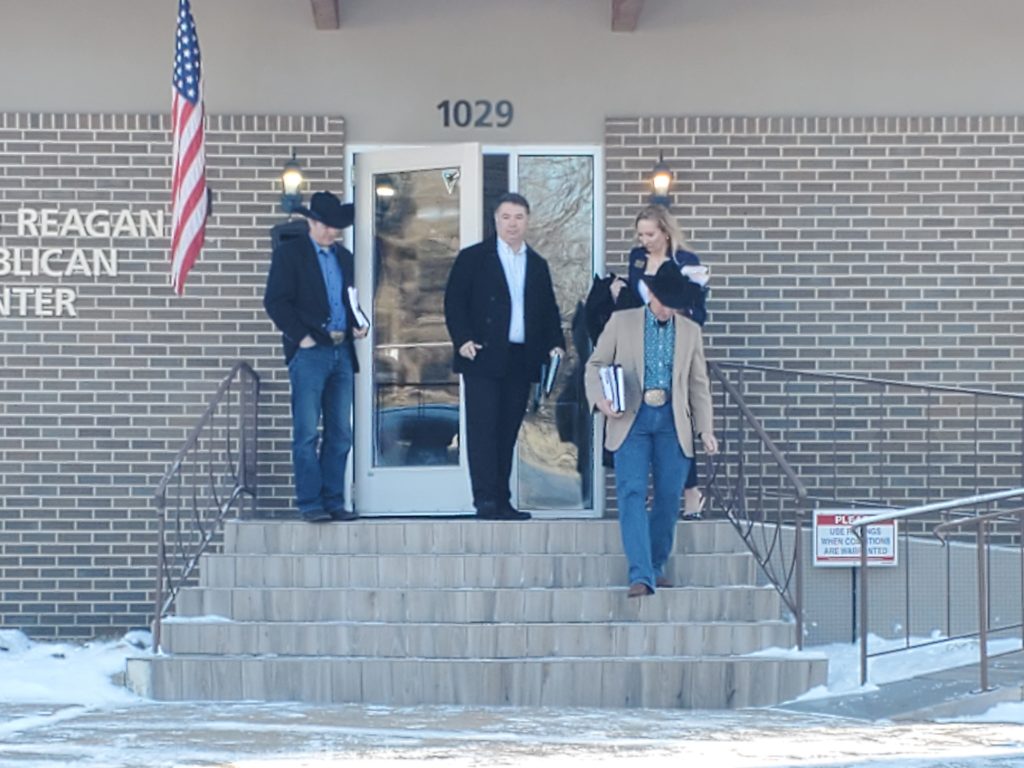 BISMARCK—An unprecedented walkout occurred at the North Dakota Republican Party state meeting this morning. Seven district chairs (or their proxies) left the meeting in protest as the state committee voted to make significant changes to the way the party operates in North Dakota. Many of the issues involved in this meeting were reported yesterday by The Dakotan.

“This is completely unprecedented,” said Paul Henderson, proxy, Dis. 9, Calvin. “In all my years in the party, I’ve never seen anything like this happen.”

"In all my years in the party, I've never seen anything like this happen."Paul Henderson, Dis. 9, Calvin

In a statement obtained by The Dakotan, the members that left the meeting explained their reasoning:

“In the 2021 special session, the legislature gave our Chair the authority over district committees which were impacted by the redistricting process. The law states that the Chair ‘may’ appoint a district chair to fill a vacancy, and our Chair decided to use that power to appoint 8 chairs and call a meeting of the State Committee. We appreciate the difficult position our State Chair was put into by our legislature and governor, and we understand that they were convinced such actions were necessary, due to an emergency clause. In no way are our words questioning the character of those who were appointed and agreed to serve our Party.”

The statement continued, “However, we firmly believe that this was improper, and that the fundamental rights of the party members of the newly-formed districts were violated. The First Amendment guarantees the right to peaceable assembly, and this principle of voluntary association is the core of all private organizations in our nation – including political parties. The legal principle of expressive association is deeply rooted in our bill of rights, and has been affirmed by numerous court rulings over the decades. The rights of an assembly are held by those who choose to assemble, and to deny them that right, simply because the government has intervened against those rights, is morally wrong. The rights of the 132,000 residents of these districts and others with significant boundary changes, who have the opportunity to join and affiliate with our Party, have been trampled.”

Hinz wanted to demonstrate her support for what occurred. She told the protesting committee members, “I want you to know how proud I am to stand with you.” Afterwards, she explained, "The gentlemen with whom I left all understand that freedom is so important, and that the right to vote is paramount." She continued, "They all intimately get that it should be a bottom-up, grass roots thing, and that it's not a ruling class over the minions, and that's why I'm so proud to stand with them."

"If you want to kill your party, that's the way to do it."Lori Hinz, National Committeewoman, Republican party

One significant change that occurred after the chairs left in protest was that the College Republicans and Young Republicans were no longer considered voting members of the state committee. Hinz said, “These people are the workers.” She continued, “If you want to kill your party, that’s the way to do it.”

The protesting committee members attempted less severe means before walking out. Mike Blessum, District 5 proxy and current Vice Chair, stated, “We wanted the body to know we thought the meeting was illegitimate. We wanted the districts that had been affected by the redistricting to have a chance to re-organize before this business took place. They never even let us say that.”

In addition to the protest that occurred inside, about 20 protestors braved the double-digit-degree-below-zero conditions outside the party headquarters to make their position heard.

Jensen added, “Do you know [party officials] called the Bismarck police to tell us to get off the property? I’m a paid party member, have been for years. But all of a sudden I’m not even allowed on the property?”

Donna Henderson, Calvin, indicated she was confused about why she was not allowed to attend the meeting. “My husband has been a district chair, he’s in there right now as a proxy, because he was re-districted out, and I’ve been coming to these state meetings for 12 years. All of a sudden I’m not allowed inside?”

At the time this article was published, state party chair Perrie Schafer had not yet responded to a request for comment.

Keep checking back to The Dakotan in the coming week for more follow-up on these unprecedented events.