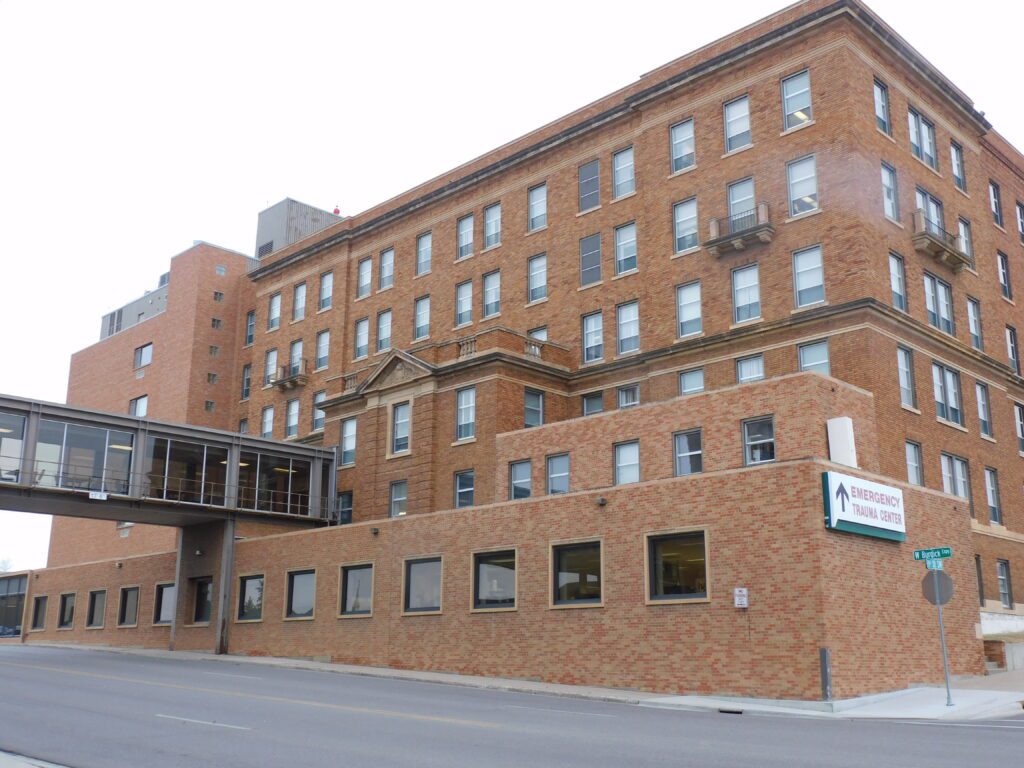 MINOT – One of the largest construction projects in this city’s history is nearing completion. It wasn’t without challenges, including an explosion and fire, and changing contractors, but the new Trinity Hospital campus is within months of beginning full operation.

“Our revamped timeline following the fire established we wound end construction in calendar year 2022 and we’re at the at the end of construction,” said Randy Schwann, Trinity Health vice-president. “We expect to start our preparatory work in January.”

Preparatory work will include getting various medical teams on site to conduct “dry runs” to get well acquainted with their new surroundings. They will learn where equipment is located, how work will flow, and the general operation of the new facility. The new hospital will be a significant change from the aging building they will be vacating downtown.

“We expect to move the first patient about the end of April,” said Schwann. “That’s pretty quick. We have to do all the preparatory work to make that move so on day one it is business as normal.”

Contractors are finishing up detail work, which is expected to wrap up by the end of the year. It is then that moving equipment into the facility and getting it operational will ramp up.

“It’s very complicated choreography with a move as big as this,” explained Schwann. “We’ve been working on it for 18 months. We’ve hired consultants that have moved hospitals before. It is what they do.”

An example, said Schwann, is the “partnerships and alliances” necessary to facility the proper movement of patients from the old building to the new.

“The State Health Department has some vehicles and buses and things that we’ll probably be utilizing. We’ll use ambulances, not just Minot’s, but other ambulances in the region very likely will be asked to participate,” said Schwann. “All indication are that there will be a patient being transported to the new hospital about every eight to 10 minutes.”

When patients arrive at the new Trinity Hospital campus all equipment, computers, and pharmaceutical machines will be in place.

“It’s pretty amazing, actually,” remarked Schwann. “There will be very little, if at all, down time. We don’t expect that to happen. We may reduce surgeries for a day, but we’ve got to run a hospital all the way through it.”

Trinity has contracted with movers who have already been going from department to department, learning the inventory, and how best to make the move. However, there's already been an impressive amount of moving going on at the new facility which will be stocked with virtually all new furnishings.

“We’ve been moving equipment in for weeks and weeks now,” said Schwann. “There was a time last month when we had several semi’s a day coming in with equipment. For example, they dropped off something like 1,100 chairs in one day.”

Schwann said the new hospital will require additional employees due to expanded services over what is currently available at the existing hospital.

“The old hospital will be nearly vacant of course,” said Schwann. “We’ll still be using it for some storage, a little bit, but eventually that will no longer be used. Trinity Health East, formerly the Professional Building, will be nearly vacant. We don’t intend to use it as a clinic any longer. Trinity Health West, on the corner of Burdick and Broadway, will still be used as an outpatient medical center.”

The former St. Joseph’s Hospital will continue to be utilized by Trinity. The building houses a number of clinic services, such as a psychiatric unit and behavioral health. Medical Arts Clinic will remain in service as a multi-specialty clinic.

“The space we are vacating, some of it, was built in 1922. That's 100 years ago and health care today is delivered differently. Dramatically different,” said Schwann. “We need to change that environment, be more efficient. The bottom line is better care. The community deserves that.”