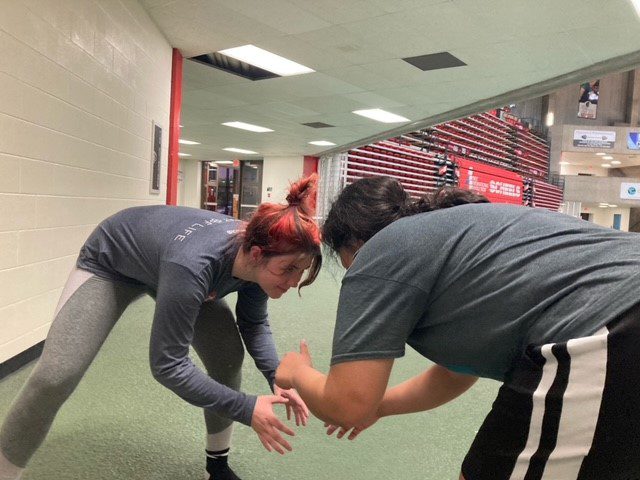 MINOT – Women’s wrestling has come to Minot State University for the first time, with its official season having started Monday.

“It’s something I’ve been really pushing for since I started coaching here eight years ago,” said Forde. “I know it was something that was talked about and in the works for quite a while, and then it finally came to fruition.”

“I worked with USA Wrestling by just getting some information on women’s wrestling and some statistics on which schools have it and where those schools are,” said Forde. “They were able to help us put together a plan for starting a new program. Our former athletic director Andy Carter really made the push to sell this to the president’s council.”

Forde said Minot State had men’s wrestling back in 1990, dropped the program for a few years, then brought it back in 2010. He said high school girls wrestling has been sanctioned in North Dakota for the past couple years, and that was a huge factor in being able to get women’s wrestling at MSU.

“I think it’s really neat for the wrestling culture on campus and here in Minot,” said Forde. “We’re able to bring some awesome new coaches. We’re definitely trying to work together as much as possible.”

Minot State is the first school in the conference to have women’s wrestling.

“Last August I came in and had a whole year to recruit,” said Mitchem. “You have a little over 114 colleges and universities that offer women’s wrestling at the NCAA level. So, it’s really a dog fight when you’re recruiting at this point in the game.”

Mitchem, who has coached other sports for over seven years, said so far she has 13 student athletes but is looking to more than double that for next year.

“Wrestling is an all-physical sport, you have to be mentally prepared, physically prepared,” said Mitchem. “They weight train, we have conditioning, we have wrestling practice.”

The athletes practiced before the season started three days a week, and now practice daily from 6-8 a.m.

The top eight wrestlers will qualify for the regional tournament.

“We’re very excited for these young ladies, especially since it’s a growing sport, and developing the program,” said Mitchem. “And really inspiring the girls to say, ok, who’s going to be the first in school history to accomplish these things, and not everybody can say they have that opportunity. They have a special opportunity to be the first.”