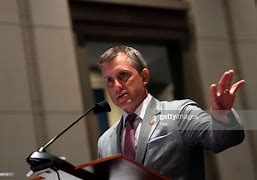 MINOT – Two candidates are on the ballot for a North Dakota’s lone seat in the United States House of Representatives – Republican incumbent Kelly Armstrong of Bismarck, who is seeking his second term, and independent challenger Cara Mund, Bismarck, who is making her first run at elected office. Election day is Tuesday, November 8.

The Dakotan invited both candidates to answer a series of questions. Armstrong responded. Mund did not.

Armstrong – I love North Dakota and I’ve worked really hard in my personal, political, and professional life to advocate for things that are important to North Dakota. It’s a joke but not really, a lot of times in D.C. I feel like I’m North Dakota’s criminal defense attorney. The bureaucracy wants to do a lot of things that make it harder for us to do the things that we need to do. What we do here is really important to everybody else.

The Dakotan – What makes you different from your opponent?

Armstrong – The short answer is I’m conservative, she’s liberal. The infrastructure bill, the IRA, which does nothing to reduce inflation, she supports bills that make it harder for North Dakota. I fight to make sure we keep our celebrity status as the only state in the country that doesn’t have voter registration. She supports the John Lewis Voting Rights Act which would require North Dakota to have registration.

The Dakotan – What are your main issues and goals if you get re-elected?

Armstrong – First and foremost to hold this administration accountable on lots of different oversight issues. You can talk about baby formula, you can talk about the fact that the EPA is trying to turn everybody into an organic farmer whether they want to be or not.

We’re starting on a farm bill. I think one of the biggest reasons we want Republicans to take back the House in November is so the farm bill is about agriculture and not climate. From infrastructure in the ground to requirements that just cost a lot of money and don’t make things easier.

My absolute number one priority is to make sure they stop printing and spending money we don’t have. We just have to get back to a normal budgeting process. The biggest long-term threat we face as a country is $31 trillion in debt, biggest short-term threat we face is inflation. They both are caused by the federal government pumping an excessive $9 trillion into the economy the last 24 months. There’s a reason nobody hates Santa Claus, but if it’s not paid for, we shouldn’t be passing it. I think for North Dakota, there’s far more things that unite us than divide us. Our communities are bigger, we’ve gotten more successful, we’ve gotten younger. It’s fantastic.