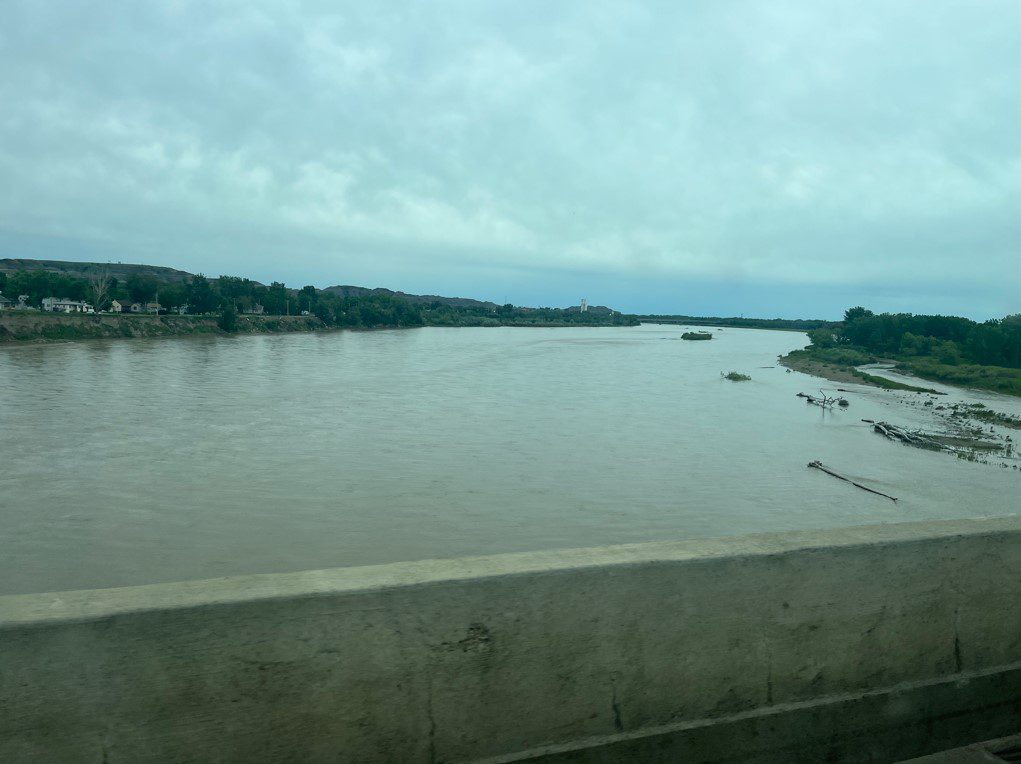 A river on the rise, the Yellowstone near Billings, Montana this past weekend. Heavy rains resulted in a historic, damaging, and dramatic rise throughout the drainage. [Photo: Kirsten Olson]

A river on the rise, the Yellowstone near Billings, Montana this past weekend. Heavy rains resulted in a historic, damaging, and dramatic rise throughout the drainage. [Photo: Kirsten Olson]

RIVERDALE — There is a lot of water headed toward North Dakota, but it won’t resemble the damaging torrent that has ripped its way across Montana.

Rainfall of two inches or more that fell over rocky surfaces and steep terrain this past weekend surged into the Yellowstone River, creating historic flows that ripped through towns, took out bridges, and eroded highways. An estimated 10,000 people were evacuated from Yellowstone National Park where its north entrance near Gardiner, Mont., has been washed away.

The Yellowstone flows unchecked into North Dakota, joining the Missouri River at the confluence area near Williston before flowing into Lake Sakakawea. However, the width and depth of the Yellowstone increases significantly as it flows west, meaning it can contain much more water than where disastrous flooding has already occurred in Montana.

“We do have a flood warning for the Missouri River near Williston with the expectation of minor flooding, and maybe moderate flooding. Maybe,” said Allen Schlag, National Weather Service hydrologist.

The increased flow in the Yellowstone River will increase the expected water level in Lake Sakakawea, which has been somewhat lower than what many would consider ideal for the reservoir.

“It’s unfortunate that it caused so much damage upstream from us. It’s a record flood with record stages at several locations on the Yellowstone,” said Todd Lindquist, U.S. Army Corps of Engineers, Riverdale. “We have plenty of storage for water. Our Forecast Center is thinking 4-5 feet above previous forecasts, which gets us back to where we wanted to be.”

“A person has to remember the Yellowstone is a lot smaller out in western Montana,” said Schlag. “To put it in perspective, it’s a really bad deal there but it is much less problematic in North Dakota. It certainly isn’t going to be a significant problem.”