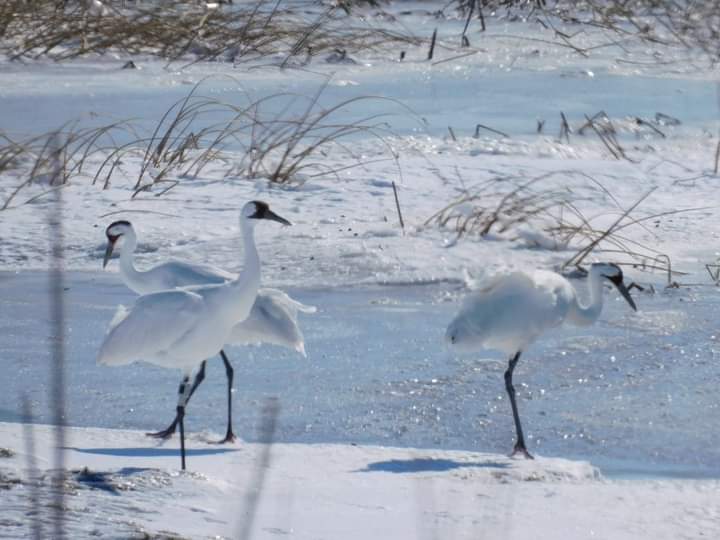 Whooping cranes are in the midst of their fall migration and sightings will increase as they make their way through North Dakota over the next several weeks. Anyone seeing these endangered birds as they move through the state should report sightings so the birds can be tracked.

The whooping cranes that do travel through North Dakota are part of a population of about 500 birds on their way from nesting grounds at Wood Buffalo National Park in Canada to wintering grounds in Aransas National Wildlife Refuge in Texas, a distance of about 2,500 miles.

Whoopers stand about 5 feet tall and have a wingspan of about 7 feet from tip to tip. They are bright white with black wing tips, which are visible only when the wings are outspread. In flight, they extend their long necks forward, while their long, slender legs extend out behind the tail. Whooping cranes typically migrate singly, or in groups of 2-3 birds, and may be associated with sandhill cranes.

Other white birds such as snow geese, swans and egrets are often mistaken for whooping cranes. The most common misidentification is pelicans, because their wingspan is similar and they tuck their pouch in flight, leaving a silhouette similar to a crane when viewed from below.

Anyone sighting whoopers should not disturb them, but record the date, time, location and the birds' activity. Observers should also look for and report colored bands, which may occur on one or both legs. Whooping cranes have been marked with colored leg bands to help determine their identity.