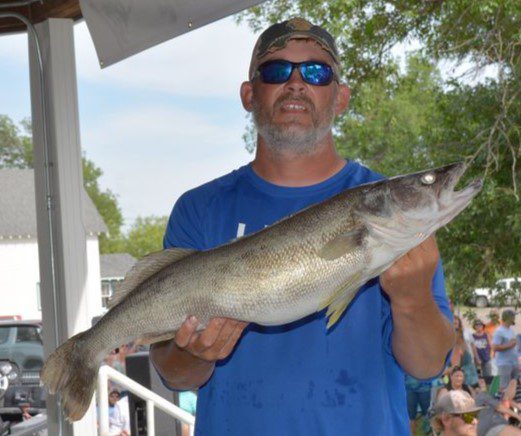 Justin Racine, Minot, with the largest walleye ever caught in the 47-year history of the North Dakota Governor’s Walleye Cup. Racine caught the fish on the first day of the event, July 15. (Photo: Submitted)

Justin Racine, Minot, with the largest walleye ever caught in the 47-year history of the North Dakota Governor’s Walleye Cup. Racine caught the fish on the first day of the event, July 15. (Photo: Submitted)

Revenge Fish of a Lifetime

GARRISON – This fish had it all.

It was caught during the first morning of the state’s largest walleye tournament. It was tagged. It paid $1,215.

Yup, fish of a lifetime. No doubt about that.

“It pulled drag and, instantly, I thought it was a northern pike,” said Justin Racine, Minot, when asked to describe the moment he hooked into the whopper. “It went to the right side of the boat, then the left. Then it stopped and was hard to move. It wasn’t coming in.”

Racine was fishing in the front of the boat. His brother and tourney teammate, Brent Racine, Minot, was behind him and preparing to net the fish. From his position he couldn’t see what Justin Racine already saw, that the fish wasn’t a pike but rather a huge walleye. The kind that wins tournaments, if you can land it.

“I lied to my brother, telling him it was a northern. I was trying to keep him calm,” remarked Justin Racine.

Then the fish dashed along the side of the boat where Brent Racine got his first look at it.

“He told me to keep reeling slow. He was trying to calm me down,” laughed Justin Racine. “We fish pretty light, six-pound test Lindys. You are always worried about losing something that big and this one was fighting. I had to check the drag a few times throughout the fight.”

After a period of time when the outcome was in doubt, Brent Racine was able to net the lunker.

“It was amazing to see that fish in the boat, tagged too,” said Justin Racine. “We had a pretty big bear hug. It was very, very apparent that it was, for sure, over 10 pounds.”

Ten years earlier it was Brent Racine who landed the biggest walleye in the Governor’s Cup, a 7.5 pounder. Justin Racine’s walleye tipped the scale at 11.08 pounds. Ah, sweet revenge!

“Pretty cool fish,” said Justin Racine. “We fish a lot and knew at some point in our fishing lives that we’d get a fish of a lifetime. To catch it in a tournament was really special.”

Information returned from the North Dakota Game and Fish Department about the tagged fish revealed that it had been tagged in Douglas Bay in 2020, measuring 31 inches. It was 32 inches long when caught.

“What a beauty,” said Joyce Pfliger, tournament director. “It’s a record for the Governor’s Cup.”

The Racine’s located some good fish during prefishing for the tournament, and those fish were still there opening morning of the event. The big fish was hooked, on a leech, about 8:30 a.m.

When the final weigh-in was complete at the City Park, the Racine’s total catch came up four-tenths of a pound less than that of winning team Cody Pardon and Josh Gladback of Minot, but good enough for second place.

“It was a little bittersweet. Our goal is to win that tournament, obviously,” said Justin Racine. “But we did get a once-in-a-lifetime fish.”