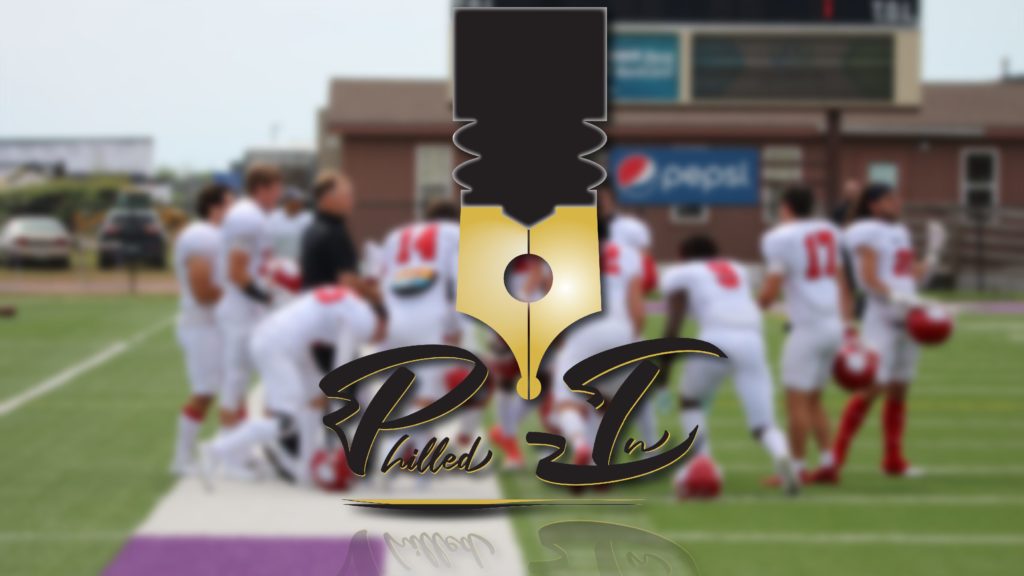 This past weekend the MSU Beavers fell to 0-3 on the season. A home loss to Wayne State University gives Minot State its third defeat in three games. Despite a 50-yard pass to open their first offensive procession, the Beavers could only muster 10 points against the Wildcat defense in a 49-10 loss. The Wildcat offense went unchecked, scoring at will on the ground and in the air. Poor tackling and several busts in coverage gave Wayne State a 35-3 lead at halftime.

Reflecting on last weekend’s loss, Minot State Head Coach Mike Aldrich was not happy with his team’s first half performance.

“I was disappointed, it was a disappointing loss. I felt we played with hope to win rather than belief that we were going to win. We looked tight and tense out there and let one mistake hurt us multiple times,” Aldrich said.

Aldrich compared the team’s reaction and performance to gambling.

“A gambler who is down in the hole is how we played. When a gambler is desperate for money, they go all in hoping a big win will solve all their issues. That’s how we played, we were trying so hard to make a big play to stop the bleeding, hoping it would fix everything before,” Aldrich explained, “but what we needed to do is not let a mistake affect us. Move on to the next play and just focus on doing our job. When we focus on the little things and do our job, that is where the big plays and outcomes we want come to us.”

Heading into Saturday’s night game in Marshall, Minnesota, Minot State looks to rebound and get that first W in the win column. The Mustangs of Southwest Minnesota State are 2-1 on the year. Offensively the Mustangs love to run the football. Starting running back

Jesse Sherwood leads the NSIC in rushing yards with over 550 yards and averaging 31 carries per game. The game plan defensively for Minot State is simple -- stop the run.

“It all starts with stopping the run. Their running back is leading the conference. SMSU loves to run the ball and control the clock. We need to hold this run game to short yardage and force their offense to rely on their quarterback to beat us,” Aldrich said.

The Mustangs have just one passing touchdown on the year and six interceptions thrown. If Minot State can force the SMSU to be one dimensional on offense, they have a good shot defensively.

Offensively, the Beavers are still looking to get their own running back, Ali Mohammad, going.

“We still need to establish our run game. We haven’t run the ball quite like we want to and know we can. In part due to injury on the offensive line and a lingering banged up ankle on Ali,” Aldrich explained, “but the way Southwest plays defensively, dropping a lot of guys into coverage to prevent any big plays, our run game needs to be there.”

If Minot State can get the run game going and force SMSU to commit more guys to the run, expect some big pass play opportunities as well. The Beavers showed a glimpse of what they can do in the passing game against Wayne State with wide receiver Peyton Lamoureux having 100 receiving yards and Eric Palmquist catching a second half touchdown.

“Our pass game is there; we just have to get our quarterback in rhythm. We can rely on the pass game if we need to, that was evident in a couple of games last year,” Aldrich said.

This matchup between the Beavers and Mustangs could come down to the wire. In close games special teams can be the difference. The Beavers are at the top of the conference in punt and kickoff return yards yielded. In the return game Knylen Miller-Levi has been a few steps away from breaking for a score. Statistics show that a score on special teams, or a blocked kick, significantly factor into boosting the odds of winning the game.

All three phases of the game need to perform well in order for Minot State to crack their first victory. The Beavers kickoff against the Mustangs at 5 p.m. at the Schwan Regional Event Center.

A Chance to Heal