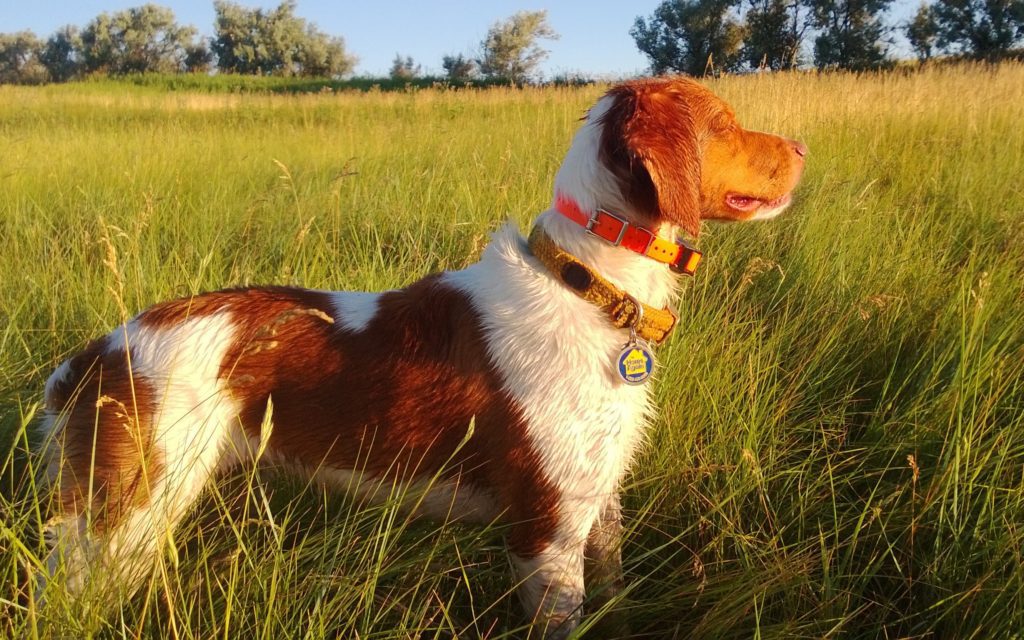 When Garnet the upland and waterfowl hunting maniac isn’t in the field hunting birds, she is likely plotting revenge against her furry nemesis – squirrels. (Photo: Patricia Stockdill)

When Garnet the upland and waterfowl hunting maniac isn’t in the field hunting birds, she is likely plotting revenge against her furry nemesis – squirrels. (Photo: Patricia Stockdill)

GARRISON — Sorry, this is getting ridiculous – Garnet and her squirrel fixation, that is.

Garnet, the younger of the two hunting maniacs in the household, like most dogs, has a squirrel fixation. Admittedly Eider does too, but at 13 years of age and a larger, slower Brittany she recognizes she can’t catch them.

So, Eider doesn’t bother. She just supervises the family circus.

Garnet, on the other hand, feels it’s her mission in life to not only point, flush, and retrieve upland birds and waterfowl but to rid the planet of squirrels as well.

She succeeded about three years ago in a MMA match that sent her nemesis to squirrel heaven and Garnet to her favorite veterinarian. She became the top “Worst Dog-Squirrel Encounter” award winner in his 30-plus-year career.

A rabies booster shot, antibiotics, and words of wisdom later, “watch to make sure the swelling goes down so she can breathe”, the trophy winner was on her way home.

A week later, she almost succeeded. However, her target survived. That time Garnet also fared better with just a couple of small bites on her cheek that didn’t require another visit to her favorite veterinarian.

Garnet monitors her yard from the sanctuary of the house, separated from her nemesis by glass doors. Nose prints stretching about halfway up the glass mark her frustration at not being able to open the handle to make yet another attempt at squirrel removal.

Over the years it’s become a ritual to conduct “squirrel sweeps” to chase them away when exiting the house with the dogs before Garnet kicks it into overdrive in pursuit.

Admittedly, we humans complicated the issue by placing a bird feeder and birdbath near trees that aren’t that far from the door. It’s great for the birds but perfect for squirrels to munch on sunflowers and take a quick bath.

So, yes, we’ve created our problem.

It’s just that the chickadees and an array of other birds cherish the feeder and birdbath.

However, the most recent Garnet and favorite nemesis encounter finally convinced the humans of the household the feeder had to go. This time the MMA match involved not one, not two, but three squirrels.

You see, the “squirrel sweep” netted a flash of two red, bushy-tailed critters departing in haste from the feeder.

But it missed the third squirrel lurking in the trees.

And Garnet didn’t. The two squirrels bolted in opposite directions before Garnet could get to them. But the third squirrel, jumping down from its hiding spot, landed on Garnet.

And the chase was on with Garnet succeeding in grabbing the third nemesis.

After a quick tussle, Garnet must have realized she needed a different angle in her attempt to wrestle the squirrel to its final resting place on earth and let go. Or maybe she let go because the squirrel was winning. We’re not sure.

Whatever the reason, Garnet released her grip and the squirrel escaped; its fate remains unknown.

Once again it appeared Garnet would have yet another chance to visit her favorite veterinarian to see how this MMA match stacked up against the one earning her the title a few years go (which she still holds, by the way).

Thankfully, though, after a body assessment and phone call to the veterinarian it was determined that after cleansing and medicating her wounds the swelling wasn’t as intense as her award-winning encounter. She wouldn’t have to see the vet in person unless we couldn’t get the swelling down.

Garnet is fine. No visit to the favorite veterinarian was required, this time at least.

But, really, truly, this is getting ridiculous.

This hunting maniac leaves skunks alone. She leaves porcupines alone. It only took one encounter with each of those critters for her to learn they’re not that much fun.

One would think that after multiple encounters and bites in the nose, cheeks, and even above the eyes – among other places on her face and neck – that Garnet would give up on her favorite nemesis.

We’re hoping this last encounter will truly be the finale.

But we’re not betting on it.