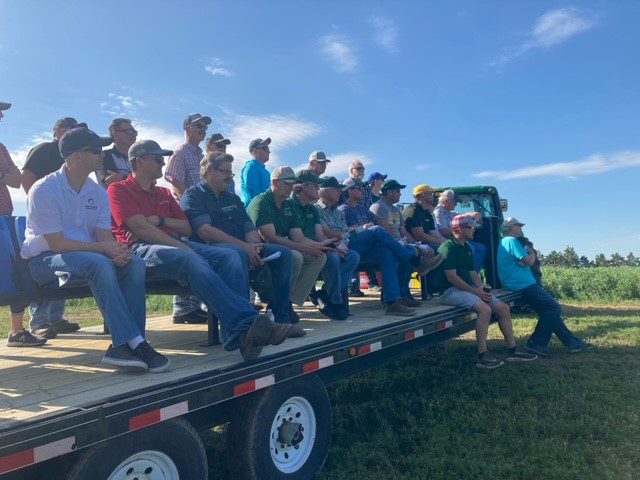 People from around the state listen to experts on agriculture at the North Central Research Extension Center’s field day Wednesday in Minot. (Photo: Lydia Hoverson/The Dakotan)

People from around the state listen to experts on agriculture at the North Central Research Extension Center’s field day Wednesday in Minot. (Photo: Lydia Hoverson/The Dakotan)

MINOT – While some may find the topic of agriculture somewhat complicated, touring the very place where a lot of food originates provides hands-on information and education.

North Central Research Extension Center hosted its annual Field Day, where people from all over the state came to tour its fields and glean knowledge from several of North Dakota’s top agriculture experts.

After everyone was gathered outside the center, farmers, ranchers, those in agriculture business, and others interested in North Dakota’s new crop advancements, loaded themselves up in trailers, where tractors pulled them around the fields to listen to experts speak on new studies and advancements.

“This thing’s got really good scab resistance,” said Green. “This is a wheat that we’ve been studying for the past few years in seeding rate trials, looking at what’s the optimum population, and how much can it stand before the lodging starts to kick in.”

Green said some of the purposes of the trials is to see if there are places the variety shouldn’t be grown, how to manage it where it does well, and testing its lodging pressure. Lodging is the bending over of crops near ground level, which can be caused by high nitrogen levels.


“Our remote sensing research, we’re trying to capture physiological maturity notes on plots in our breeding program,” Green continued. “We’re trying to find ways to fly our trials with drones to be able to see that this is the day in which this plot stopped.”

Barney Geddes, Fargo, assistant professor for NDSU’s Department of Microbiology Sciences, shared his expertise on the microbes contained in state soils and how to use pathogens in a positive way, as opposed to the often-negative connotations that come with them.

Geddes said his program is focusing on transforming agricultural systems using microbes rather than chemicals, seeing the most opportunity in replacing nitrogen, which he believes is becoming one of the main costs in the farming industry.


“Yet, I think nitrogen has the most opportunity for replacement using micro biologicals,” said Geddes. “That’s because we actually have tried and true products that have worked for many years. These products work in plants like legumes.”

Legumes can form a partnership with bacteria in the soil, according to Geddes.

“If you pull these legumes off the ground and look on the roots you’ll see these huge lobe structures,” Geddes explained. “Inside those lobe structures, what we call nodules, there are millions and millions of bacteria called rhizobia, and these bacteria can take nitrogen directly out of the air and provide it to the plant. They can actually provide almost all the nitrogen legumes need.”