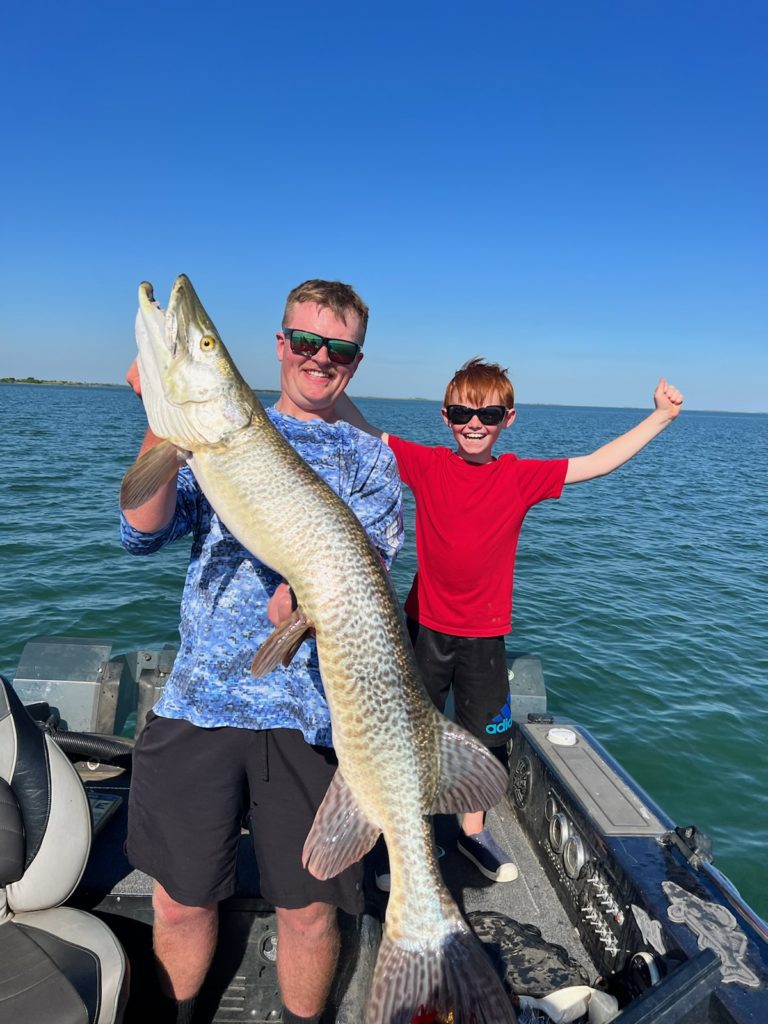 Jayd Culley, Dickinson, with a Tiger muskie pulled from Lake Audubon. The 48 ½ fish is believed to be the longest Tiger ever caught from Audubon. (Submitted photograph)

Jayd Culley, Dickinson, with a Tiger muskie pulled from Lake Audubon. The 48 ½ fish is believed to be the longest Tiger ever caught from Audubon. (Submitted photograph)

COLEHARBOR – My what a fish!

Lake Audubon has produced a lot of thrills for fishermen hooking into muskellenge, but the thrills just keep getting bigger and better. Earlier this month Jayd Culley, Dickinson, was fishing with guide Kellen Latendresse when he encountered a monster of a fish.

“I was burning a green bucktail and it was my fifth or sixth cast,” said Culley, a student at Dickinson State University.

The fish wasn’t Culley’s first muskie, but almost. One came just five days before he hooked what is likely the longest Tiger muskie surrendered by the lake that has a growing reputation as a muskie fishery. Both pure and Tiger muskies roam throughout Audubon.

“That one was an absolute thrill. I had the shakes going on and had a hard time holding it up,” said Culley. “It took me a while to calm down afterward.”

Fast-forward a few days and lightning struck again for the Dickinson angler, this time a powerful 48 ½ inch Tiger that had no intention of coming to the net.

“That fish came out of nowhere, a fish I’d never seen before,” said Latendresse. “Audubon’s muskies are bigger than last year, very healthy, stocky, and thick. They are loaded with power.”

After a few photographs the trophy Tiger was successfully released back into the water. Culley took a few extra minutes to let the experience sink in and the shaking slow down. For him, the catch was something he had been hoping for.

“Most definitely. I saw some pictures of Audubon muskie catches about three years ago and fell in love right away,” said Culley. “I’ve always loved pike fishing but muskie fishing is a whole different game. I like throwing big baits.”

That big Tiger did too, even though, as Latendresse attests, the beasts of Audubon are becoming more and more challenging for any fisherman.


“The fish are getting smarter. I definitely have seen them changing patterns, but it is still an amazing fishery,” stated Latendresse. “I’ve been fishing different water this year than in the past.”

“When the stars line up and someone gets that first muskie in the boat, it’s pretty special,” remarked Latendresse. “That’s probably the biggest reward for me, seeing the effort pay off. Other fish in North Dakota don’t quite have the same risk/reward.”


Aaron Esquibel, Minot, has teamed up with Latendresse Guide Service, accompanying him when a client wishes to have his special fishing time documented in pictures. Esquibel is active in Prairie Grit Adoptive Sports, where he produces videos of hunts for the physically challenged. His experience behind a camera is evident no matter what the format.

“It’s fun. I really like doing it,” said Esquibel. “Catching the right picture is just like catching a fish.”