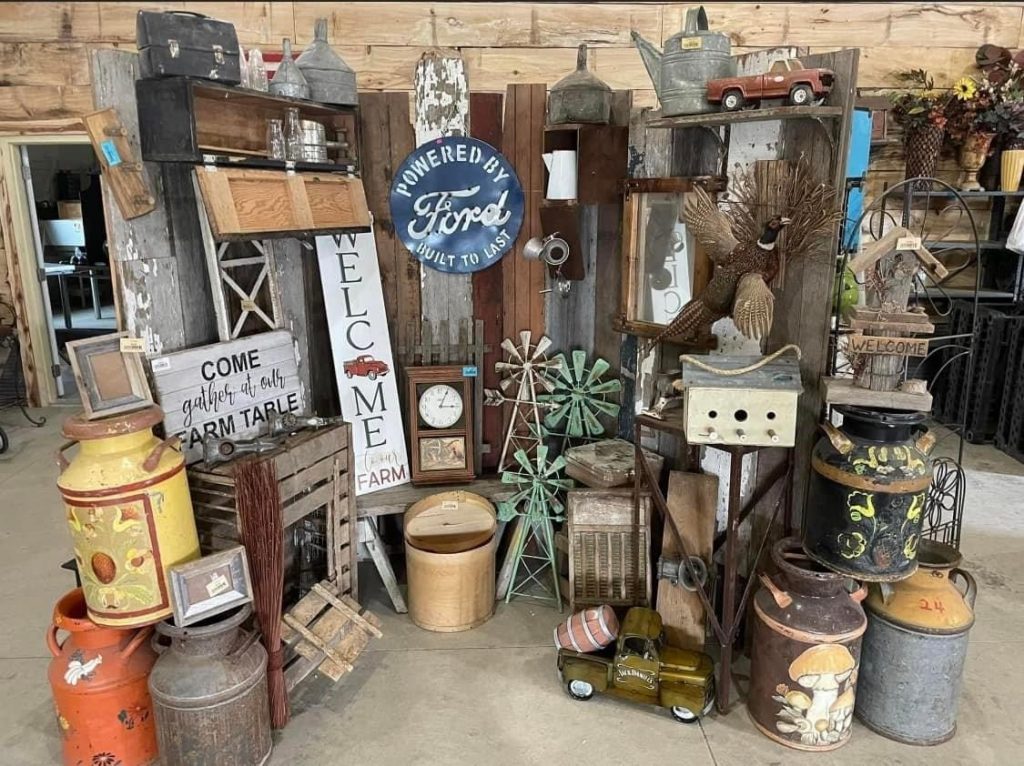 Preparations for the JunkLover Vintage Market has begun and will be ready for the event on Saturday, May 7 at the North Dakota State Fair Center! [Photo: submitted by Granville JunkAholics]

Preparations for the JunkLover Vintage Market has begun and will be ready for the event on Saturday, May 7 at the North Dakota State Fair Center! [Photo: submitted by Granville JunkAholics]

MINOT — The Granville JunkAholics are at it again with their 11th annual JunkLover Vintage Market!

Also known as the junk sale, the JunkLover Vintage Market is an event every spring, the first Saturday of May, which sells refurbished “junk” at the North Dakota State Fairgrounds. The JunkAholics also host a fall sale, Junkin’ in the Dirt, in early October.

Kolette Kramer, from Denbigh, co-owner of the JunkAholics, said she and her business partner, Wanda Bachmeier, from Granville, gather a variety of items throughout the year.

“We find stuff at thrift stores, rummage sales, boulevard,” said Kramer. “People call us, and we clean out houses.”

The ladies then take the “junk” and make it look cute.

“A lot of times we’ll take stuff home and paint it,” Kramer explained. “We love to take a piece and change it up to make it new again. Giving another life to an older piece lets it stay out of the landfills. Just add color, a new piece of trim, mix two pieces together to make one - anything to spice it up and make it appeal to someone again.”


Kramer said there’s something for everyone at the sale. Old, new, and nostalgic.

“Even if it’s a memory for somebody, and they’ll stick it on their shelf for a year or so, because it reminds them of their grandma,” said Kramer.

While Kramer and Bachmeier sell all of their items in the Theater Room in the All Seasons Arena, they host vendors in the two large rooms on either side of it. In one room, there are vendors that also sell “junk”, and in the other, different small businesses from around Minot sell their products. Kramer said some vendors come to both sales of the year, while others will only go to one, which makes for a slight difference in each sale.


“We have about 100 booths,” said Bachmeier. She explained that Granville JunkAholics wares are not included in the 100 booth count and just their junk alone makes about two semi truck loads.

Both Kramer and Bachmeier expressed their gratitude for the North Dakota State Fair Center and staff.

“They are easy to work with and take on a lot of the work we used to have to do ourselves when we were in Granville and Towner,” said Kramer. “And inside the fair center, the weather is always the same.”

Around 2000-2500 people show up every year to shop, according to Kramer, with around 20 people helping out for the whole event, which includes taking admissions, setting up and tearing down.


Bachmeier and Kramer talked about how they got started in this business.

“I had too much stuff, that’s the truth,” said Bachmeier. “We had too much junk of our own. More people wanted to join us. It started out, there were six of us. Our rules were, we each had to bring a horse trailer load. It just kind of grew from a want of people. We like to make it so you plan to spend the whole day. They can shop, they can eat, there’s concessions here and sweet treats. The circus is going on. It’s a Mother’s Day event!”

More information on the Granville JunkAholics can be found on their Facebook page. They can also be contacted at granvillejunkaholic@gmail.com. Though the booths are booked for this event, anyone can contact them to be a vendor for the next one.