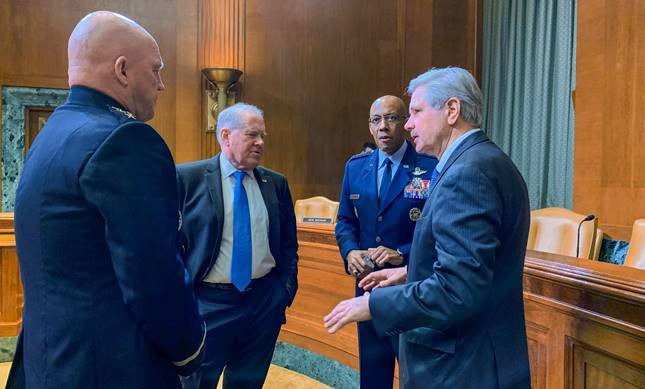 WASHINGTON, D.C. — Senator John Hoeven, R-N.D., a member of the Senate Defense Appropriations Committee, this week secured a commitment from U.S. Space Force Chief John Raymond to continue advancing the Space Development Agency’s (SDA) Space Networking Center at Grand Forks Air Force Base as the SDA prepares to become part of the Space Force in October. The Space Networking Center will support the SDA’s new low-Earth orbit (LEO) mission and serve as the backbone for all U.S. military communications across the globe.

“Grand Forks Air Force Base is the ideal location to host the Space Development Agency’s first space networking center in support of the forthcoming low-Earth orbit satellite network,” said Hoeven. “We’ve been working with SDA and the Air Force to secure this new mission, which is essential for our nation to stay ahead of our adversaries in developing critical new technologies. In October of this year, SDA will become a part of the Space Force, which is a logical long-term home for this agency. We secured a commitment from General Raymond that this transition will be smooth and SDA will continue to have the support and flexibility to conduct this vital mission.”

Over time, the mission could include not only operating SDA satellites but linking them with unmanned aerial systems (UAS), which would complement the base’s role in the Air Force’s intelligence, surveillance and reconnaissance (ISR) missions.

Senator Hoeven, along with Senator Kevin Cramer, worked with SDA, including Director Derek Tournear, to identify funding priorities to help advance the new satellite networking center and also discussed this priority with Air Force Chief of Staff General Charles Brown during a visit to Grand Forks.

SRT Distributes Nearly $2.4 Million in Capital Credits to its Members