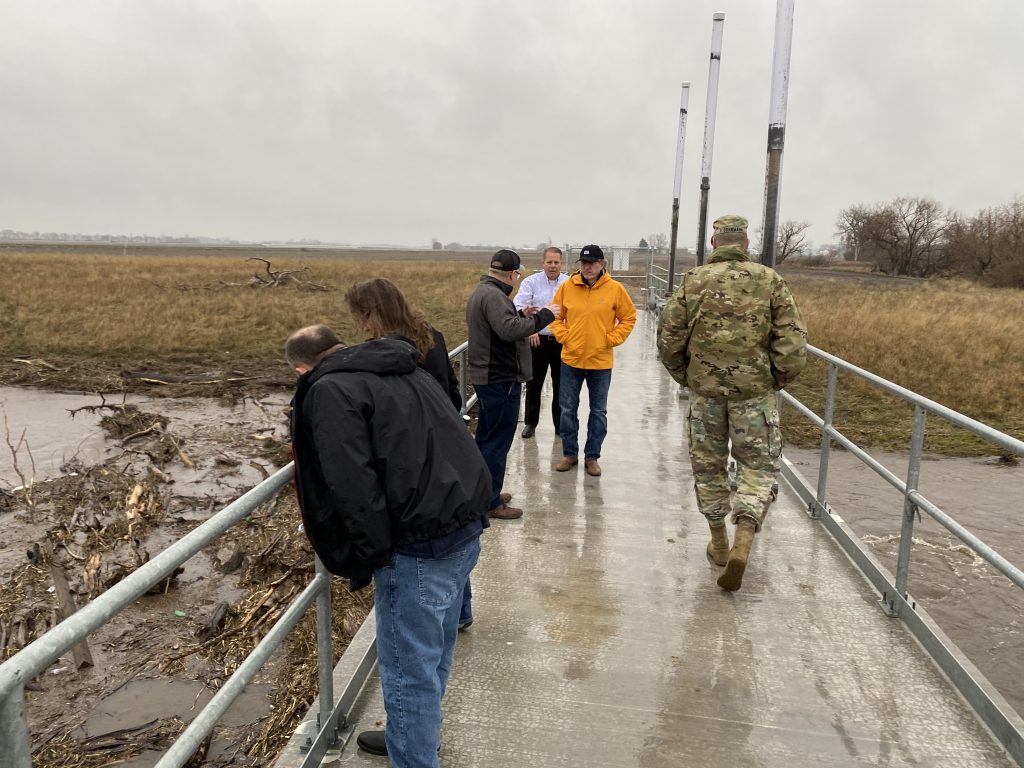 The governor was joined by Maj. Gen. Al Dohrmann, adjutant general of the North Dakota National Guard and director of the state Department of Emergency Services, North Dakota Homeland Security Director Darin Hanson and Department of Water Resources Director Andrea Travnicek as they met with Cavalier Mayor Lacey Hinkle, state Rep. David Monson and other local officials in Cavalier for a briefing on flood fighting efforts and discussion about future flood protection needs.

“We’re deeply grateful for the outstanding local leadership during this historic flood fight, with dozens of local, state and federal agencies collaborating with hundreds of volunteers to protect lives and property in northeast North Dakota,” Burgum said. “Thanks to their valiant efforts, communities are holding their own but remain at risk from widespread overland flooding and swollen dams and waterways, with rivers still yet to crest in cities like Pembina and Drayton. The State of North Dakota will continue to bring a whole-of-government approach to helping local governments fight floods while also supporting efforts to make their communities more resilient against flooding and other natural disasters in the long-term.”

During a roundtable discussion at the American Legion in Cavalier, local officials gave an update on efforts to stabilize the Bourbanis Dam. Last week, the North Dakota National Guard helped slow erosion of the earthen dam by using two Black Hawk helicopters to place 213 1-ton sandbags. On Friday, the Minnesota National Guard responded to an Emergency Management Assistance Compact request from North Dakota, providing a Chinook helicopter that strategically placed two 5-ton water pumps capable of pumping 4,000 gallons per minute to relieve pressure on the dam.


“We’re currently just trying to get water out of the dam as quickly as possible,” said Zach Herrmann of Houston Engineering, engineer for the Pembina County Water Resource Board. He noted repairs and improvements are planned once the water level drops, and officials are hoping this week’s rainfall comes slowly enough to manage the situation with what’s in place. “We’re definitely not out of the woods with Bourbanis Dam yet.”

After the roundtable, Burgum toured Renwick Dam at Icelandic State Park west of Cavalier. The dam underwent an $8.9 million rehabilitation project partially funded by the state in 2013 and has performed well during the current flood, officials said.

In Grafton, Mayor Chris West and project manager Jon Markusen of KLJ showed Burgum how a diversion project completed last year is protecting the city from the swollen Park River and overland flooding. The $48 million project, being paid for with a combination of local and state funding including $32 million from the State Water Commission, includes a 3.2-mile bypass channel, 12 miles of tieback levees and a control structure.


West said the diversion is working “phenomenally,” while also expressing concern for outlying communities and rural areas that continue to face challenges.

Burgum declared a statewide emergency on April 25 after severe spring storms April 22-24 brought heavy rains and snowmelt that swelled creeks and rivers within the Sheyenne and Red River basins and swamped fields and ditches, causing overland flooding and inundating rural roads and state highways. The storms also brought freezing rain and snow to western North Dakota, toppling thousands of utility poles and knocking out power to thousands of residents.

The emergency declaration sets the stage for requesting a presidential disaster declaration, which if granted would unlock FEMA public assistance to help cities, counties and townships pay for the cost repairs to utilities, roads and other infrastructure. Hanson, the Homeland Security director, urged local officials to document their costs for reimbursement, noting the cost-share on a presidential declaration would be 10% state, 75% federal and 15% local.

“We do expect we should easily meet the threshold,” Hanson said.

City of Minot to Remove Snow Downtown Starting This Weekend