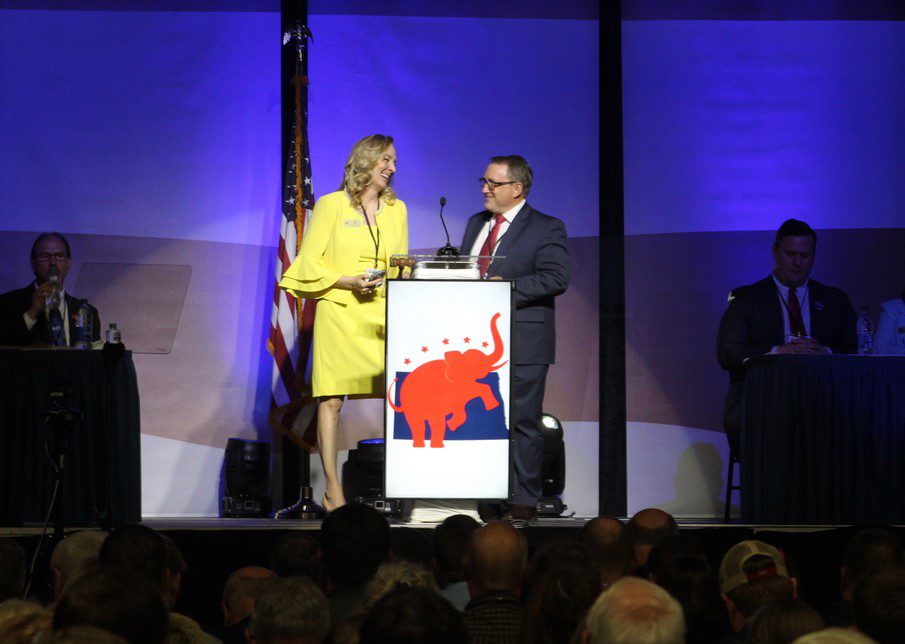 After a long delay in counting the credentials, the report stated 2321 delegates were in attendance on Saturday.

That was only the beginning of such delays.

Perrie Schafer and Gary Emineth were both nominated for convention chair.

During the counting of the ballots for convention chair, Governor Doug Burgum gave a speech.

“In North Dakota, our fight is against the radical left,” said Gov. Burgum. “As humans, we are all imperfect. We the people of the United States of America are a people that care deeply and does greatly.”

Following the official ballot count for convention chair, which went to Schafer, the convention moved to the endorsement of U.S. Senate.

In waiting for the ballots for the endorsement of U.S. Senate, the convention had a tribute to former Attorney General Wayne Stenehjem (1953-2022) from his wife Beth Bakke Stenehjem.

Following the official ballot count for U.S. Senate, which went in Sen. Hoeven's favor, the rest of convention moved along quickly.

Since the other races were uncontested and the deadline had passed for anyone to run in those positions at the convention, the chair declared the endorsements to the 7 candidates running for those positions.

That included the endorsement for U.S. House of Representative, which went to Rep. Kelly Armstrong.

“Our biggest threat is the federal government,” said Rep. Armstrong. “We’re getting the House back in November.”

“We are committed to taking a commonsense approach of challenging the regulations of the federal government,” said Goehring.

“My slogan has always been ‘Power to this people,’” said Fedorchak. “I will continue to apply that slogan.”

“Innovation over regulation,” said Haugen-Hoffart, “Let’s continue to do it well.”

“I am grateful for the votes of strong conservative delegates,” said Kroshus. “I will stand for fiscal responsibility.”

“I am a conservative,” said Wrigley. “It is a privilege to serve in that capacity.”

The endorsement for the Secretary of State went to Representative Michael Howe, R-Dis. 22, Casselton.

“I will stand side by side with our Attorney General to immediately file a federal lawsuit to protect our liberties,” said Howe.

The convention passed the 2022 NDGOP Resolutions before adjourning.

More information can be found on the NDGOP's website.