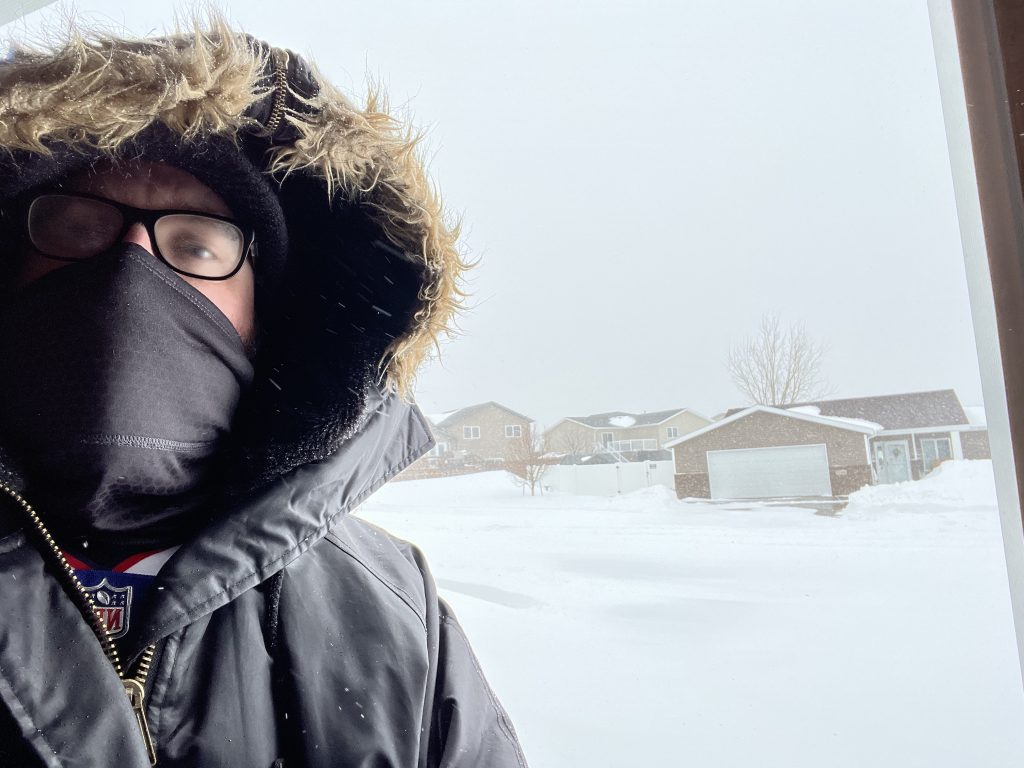 I was recently told by an expert on human feelings that there are two of the feels that we humans feel so intensely and so negatively that we will go to extra efforts to avoid feeling them: shame and loneliness. Most of us, anyway. Maybe not politicians.

I was thinking about these two feels the day before last, while clearing a three-foot-tall pile of snow out of the way of my garage. The first time I did that.

As you read this, it, will be Day Four of the Terrible, Endless (Seemingly), Largely Awful Blizzard of April 2022. The drifts of flakes are purportedly not as high here in Bismarck as they are in Minot, but my house was placed directly in line with the wind’s course of this blizzard, so I keep having to tear down mounds of frozen precipitation as high as Danny Devito is tall, once per day. And, like the O.G. Penguin, himself, they just keep coming back for more.

I stopped tearing down the snow walls on Day Three. Fool me once, shame on TESLA blizzard. Fool me twice, shame on me.

Of the two TESLA feelings I mentioned at the start, shame seems to be more unbearable for us North Dakotans. Not that we welcome the loneliness; we're just largely used to it. 775,000 people spread out over 70,704 square miles will do that to a person (who has 2,543,650 square feet to spread out in).

I'm not here to minimize our lonely feelings, North Dakota. I'm here to talk about my shame. I ran out of gas halfway through snow blowing the driveway on Day One. I’ll pause now for castigation.

I've been a North Dakotan for all but two years of my 43+ years of life. And those two missing years were spent in Minnesota. So, I'm not a stranger to snowstorms.

Even ones in April. I try to stay stocked up on the essentials (milk, bread, toilet paper, microwave burritos, wi-fi range extenders) 365.2425 days per year, knowing full well it could snow at any minute.

But I forgot to fill up the gas can, last time I used it (probably January). And when the snowblower gasped to a halt at the halfway mark of clearing the grossest, heaviest snow you can easily imagine because you've been dealing with it, too, in the Right Now, I went to fill it up and found a can empty of fuel but filled to the brim with regret.


Again, not here for regret. Shame is what fueled my meltdown, out in the middle of my driveway that day, having not thought to fill the gas can rather than the bread drawer in preparation for the storm.

As all my neighbors walked in lines, up and down their driveways, smugly ridding their driveways of the wet, sloppy filth using the latest advancements in mechanical snow-moving technology, I was using a shovel. In my own head, I'd hoped I looked like I knew what I was doing. Yes, I've got this perfectly OK Troy-Bilt snowblower parked halfway inside a drift. But since exercise is another important goal of mine today, I'm choosing to suddenly go old school and kill two snowbirds with one snowstone. Just as I planned it.

My next-door neighbor saw through the facade, likely deducing that my face was either red with shame or poor cardiovascular conditioning (joke's on him, it was both!) and came over with his own freshly filled gas can.

I learned two valuable lessons that day, a.k.a. Day One. First, I might need to return the BowFlex a month ago for a refund. I was under the impression I'd look more like the chiseled

dude on the box by now, having assembled it and used it near daily since. Instead, I just look like a fat skinny guy who can’t shovel snow for longer than five minutes at a time without needing a rest.

Second, North Dakota nice still exists. Neighbors are looking out for neighbors all across the western two-thirds of our state.

Just as nice as being nice is showing kindness, as my neighbor did for me. Kindness is perhaps the greatest gift we can give each other, in these trying times of uncomfortable feelings. Driveways will clear, snow and ice will melt away. Acts of kindness for your fellow man will last, however, reverberating, spreading and rippling across our communities, like drops of rain into the lake of our collective. Not that I’m advocating for it to rain now on top of the snow. That’d be bad. It’s a metaphor. You get my drift.

Be kind. Feel not shame. And thank you, neighbor.