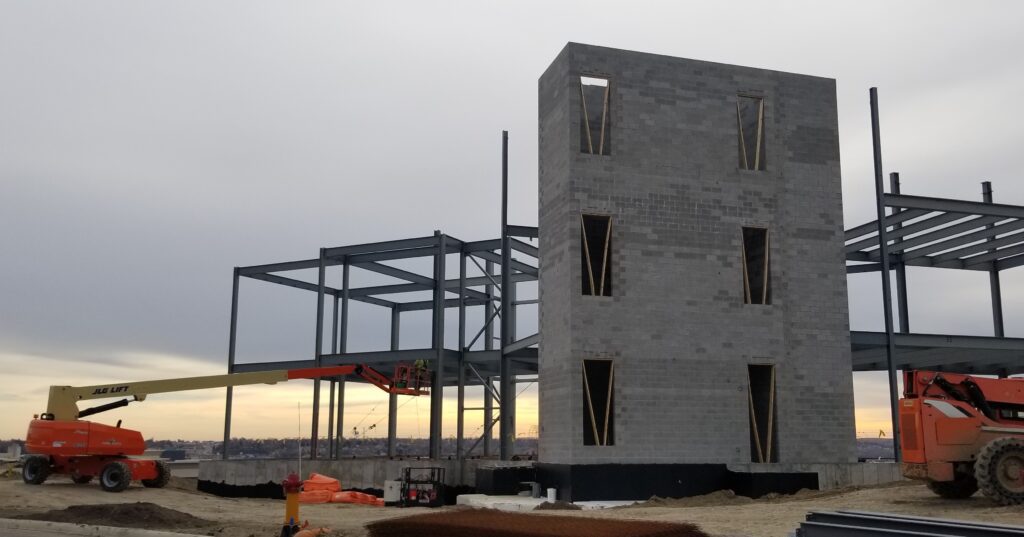 The main structure of the future Discovery Center continues to take shape. Situated on top of North Hill, the building overlooks the city on the east side of North Broadway. [Photo: Kim Fundingsland/The Dakotan]

The main structure of the future Discovery Center continues to take shape. Situated on top of North Hill, the building overlooks the city on the east side of North Broadway. [Photo: Kim Fundingsland/The Dakotan]

Rising on the Skyline

MINOT – Sitting on an overlook atop North Hill, on the east side of North Broadway, it is becoming the most notable feature on the Minot skyline. Construction of the Discovery Center is expected to be completed sometime in 2022.

The Discovery Center was spawned by what was originally a seasonal children’s museum opened in 2014 inside the Dakota Territory Air Museum. More than 20,000 people visited that temporary museum in four years, inspiring a need for a more a permanent facility.

“What we heard was that there was not enough good healthy activities for our pre-teen and young teens,” said Wendy Keller, executive director. “So, we decided to change and become more of a hybrid. It’s kind of a trend.”

While the children’s museum was popular for 8-10 year olds, the Discovery Center will expand the focus to include youth up to age 14. When completed it will house learning exhibits on four levels. The exhibits will encourage exploration and discovery, from an interactive water park area on the lower level to a B-52 model high above. There will also be a rooftop level.

“You will actually see down into the B-52 from the top of the building.” Wendy Keller, executive director

“You will actually see down into the B-52 from the top of the building,” said Keller. “There will be 16 skylights up there. The views will be amazing.”

Utilizing the rooftop as part of the Discovery Center was a natural development as the project began to come to fruition.

“There’s a long list of exciting things we can do up there,” remarked Keller. “A local ham radio group can set up an antenna and show kids how to talk to satellites. We can view stars and planets, a lot of cool things.”

It is inside the center, though, where custom built exhibits are expected to entice learning in a hands-on way. For example, a child will be able to sit in a mock-up air traffic control tower and talk to another child in the B-52. The many displays will include challenges for children of all learning levels.

“In Pattern Place there will be a lot of learning about math,” explained Keller. “There’s just some really exciting things that will happen there. We'll have a cabin, a tree house, and a camping area too. There’s a crane area kids can operate. It’s all really high quality, hands-on learning. We’ll probably have more than 170 exhibits.”

Work on the building will continue throughout the winter months. Although subject to change, there is an anticipated completion date of June 1, 2022. Following that, it will take approximately three months to complete installation of all the displays.

“We’re looking at November for opening,” said Keller. “We will definitely be a draw. We are expecting 100,000 people the first year. We’ll be a good regional draw.”

The Discovery Center will anchor what will become a very visible addition to Minot Parks and Recreation, who owns the land. Planning includes extensive landscaping, various outdoor exhibits, an amphitheater, overlook park, covered picnic area, and even T-ball fields.

"We’ll have programs to make sure we are open to everybody.” Keller

“Minot Parks has been an amazing partner,” stated Keller. “They’ve owned that land for a long time, kind of a skinny piece, and didn’t know what to do with it. It’ll be a park for young children.”

Admission cost to the Discovery Center, said Keller, will probably be $10 with family memberships in the $125 range which will allow unlimited visitation for an entire year.

“We’re looking at other things, so everyone can afford it,” said Keller. “We’ll have programs to make sure we are open to everybody.”