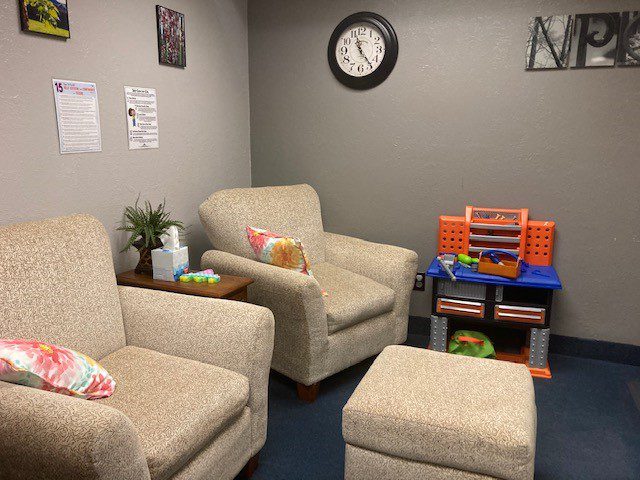 MINOT – After children have a traumatizing experience, telling their story is extremely difficult, and that’s why the Northern Plains Children’s Advocacy Center strives to make that experience easier on a child.

“Children’s advocacy centers were basically created to provide a MDT, multi-disciplinary team, focused approach or facilitation of investigations involving kids,” said Heather Waller, family advocacy coordinator at the center. “There’s probably between eight and nine hundred CACs across the country. We are one of three in North Dakota. We all have different satellite offices.”

Waller said the NPCAC’s job is to help facilitate all agencies involved to work together and avoid fragmentation of services.

“It’s about bringing everybody together to address each and every case as a team, including the family, the family is part of that team,” said Waller. “We serve up to 16 different jurisdictions depending on the different law enforcement agencies we’re working with, and the different child protection agencies.”

"We have tripled our employees in the last year,” said Connie Wilson, director of finance and operations at the center. “For years and years we had four employees, and now we have 12.”

“We’re a research-based agency, so based on research that the numbers are growing, and the needs are growing, and services have to change because people are changing, we also have to keep up with all of that, and change with it,” said Waller.

Wilson said the center has seen more children this year as of October than all of last year.

“Sometimes it ebbs and flows. In the summer we’re a little slower usually,” said Waller. “We’re still 60, 70 kids higher than last year. I don’t think abuse is happening more, I think people are beginning to report more, and sooner.”

The NPCAC advocates letting children know they have a right to be safe, and if they’re not, they should tell someone.

“Usually, they say for every one that tells their stories there’s around nine that don’t,” said Wilson.

Waller said one in six boys and one in four girls will experience sexual abuse before they reach the age of 18.  The NPCAC serves children who have been a victim of a crime and their family members.  No child is turned away.

Wilson said the center has to apply for grants for its funding. All of its services are provided free of charge.

“It seems like the system as a whole has always had a lot of gaps,” said Waller. “We’re trying to fill some needs.”

Waller spoke of substance use treatment services as something that is lacking in this state.

“It’s exciting to be able to offer that finally,” said Waller. “It’s one of the issues that people often ignore because, where do they go? For forensics, there has to be some sort of investigation that’s been initiated by law enforcement of any jurisdiction. We do involve child protection whether they have a case involved or not with these families.  It’s our protocol to include them and have them here. But if people want therapy services or addiction services, anybody can call.”

“We work with school counselors so they’re aware of our services,” said Wilson. “When a CAC is involved, I think the best part for a child is that then they only have to tell their story once.”

Waller said prior to children’s advocacy centers, children would have to tell their story 13 times.

“They tell the teacher, then the principal, then the school counselor, then law enforcement, then CPS, and it could go on and on,” said Waller. “When they bring them to us, hopefully that’s the first time they’re being interviewed and the last.”

It is in the best interest of every child to be interviewed at a children’s advocacy center if a crime has been committed against them, according to NPCAC.

“The interviews are structured and there’s a very specific training that goes into it to make sure we’re giving the child the best platform to tell their story in their own words in a very clear, here’s what happened kind of way,” said Waller.

“We work really hard to get our name out into the community because we do depend a lot on donations," said Wilson. "People who don’t have to utilize our services a lot of times don’t know about us, and they don’t know the severity of what’s going on in their community because it might not be in their home.”

With three total CACs in the state, the Northern Plains CAC has its main office in Minot, and satellite offices in Bottineau and Williston. There are other CACs in Bismarck and Fargo that have satellite offices in several surrounding cities. Though the North Dakota CACs are not under the same name, they are all under the same chapter which Waller says helps with training, marketing opportunities, and technical assistance.

“It’s a juggling act sometimes, but I get to see in this office these guys work their magic,” said Wilson. “They are the best of the best. They don’t brag about that, so I will brag about that. The amount of kids that I see come into this office and the Williston and Bottineau offices is crazy, and they are total superheroes.”