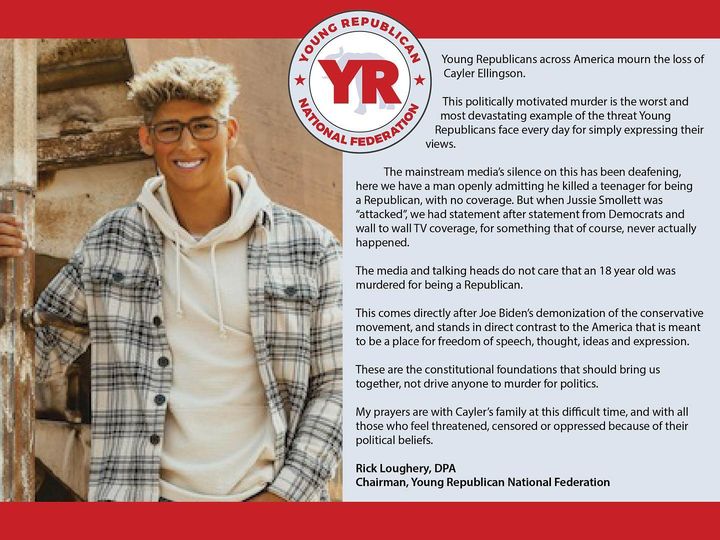 Rick Loughery, Chairman of the Young Republicans National Federation, released a statement on the death of Cayler Ellingston, 18, after he was hit allegedly on purpose by an SUV in McHenry for political beliefs. (Photo: Facebook)

Rick Loughery, Chairman of the Young Republicans National Federation, released a statement on the death of Cayler Ellingston, 18, after he was hit allegedly on purpose by an SUV in McHenry for political beliefs. (Photo: Facebook)

MCHENRY – After the tragic death of Cayler Ellingson, 18, who was hit in McHenry Sunday by a man who said he drove his vehicle into the teen after an alleged political argument, young conservatives and members of the North Dakota Young Republicans expressed their sorrow over his death.

The North Dakota Young Republicans officially responded to the death on their website, saying they are people first, family first, and Americans first.

“This problem is rooted in fearful and deceitful rhetoric; a problem that makes America’s enemies and the devil himself grin from ear to ear; a problem exacerbated by identity politics to the point of eruption; instigated by very influential people with very real consequences and tragically very real suffering the likes of which many people, sadly, lack the empathy to fully comprehend,” said the NDYR Leadership Team.

The group said the worst part is that there is no opposition to this rhetoric and called out local media for its silence on the issue, as well as calling on President Joe Biden to apologize for his “deceitful rhetoric.”

“As young people watching and waiting for someone to speak up for us; to offer solutions; to clear the air; we realize very few are willing. It seems we have but one option: We must light the path and find the way for ourselves, our future, and also those that we believed we could depend on,” the Young Republicans continued. “It is surreal that it even needs to be said in America today; as if we are living in a place as cruel as communist China but here we are.”

Rick Loughery, Chairman of the Young Republicans National Federation, also released a statement calling out Joe Biden for his recent speech about the conservative movement.

"My prayers are with Cayler's family at this difficult time, and with all those who feel threatened, censored or oppressed because of their political beliefs," said Loughery.

Another member of the NDYR, Adam Rose, Bismarck, said the death is sad and scary.

"Our hearts are heavy with sorrow for his loved ones," said Rose. "The true horror that lies within this case is the implication that violence against an individual is justified by personal beliefs. Our differences should not define us, our similarities should unite us."

Nicole Clifton Geiszler, who said she is a lifelong friend of Ellingson’s family, started a GoFundMe for them.

Independent candidate for U.S. Senate, Rick Becker, also put out a statement on Facebook, saying he believes Brandt is solely responsible for his actions, but he also believes he acted on a narrative pushed by many left leaning political figures such as the president.

“Cayler Ellingson was murdered because of his political beliefs. I can’t imagine his family’s anguish,” said Becker.

Rising on the Skyline