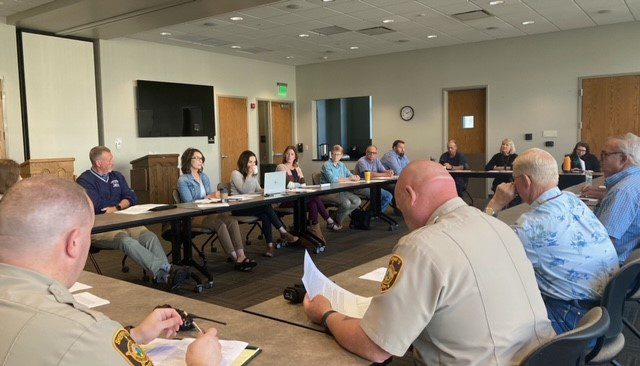 Representatives from counties across the state as well as other government entities gathered Tuesday at an Elmer Jesme conference to discuss where to place children who need shelter care. (Photo: Lydia Hoverson/The Dakotan)

Representatives from counties across the state as well as other government entities gathered Tuesday at an Elmer Jesme conference to discuss where to place children who need shelter care. (Photo: Lydia Hoverson/The Dakotan)

MINOT – A state law that recently went into effect appears to be causing housing issues for youth in need of shelter.

At an Elmer Jesme conference Tuesday inside the Ward County Administration Building, commissioners from several counties across North Dakota discussed how to deal with a new law that took effect August 1.

Lisa Jahner, assistant director of the North Dakota Association of Counties, defined three separate categories of youth: Youth with criminal charges, youth who have committed an offense that would not be a crime if committed by an adult, i.e., smoking or running away from home, and youth who have not committed anything but have been neglected and need shelter.

Before August 1, CHIPS were placed in shelter care, a place where food and lodging are provided for them for a week, or possibly more if needed until they can be placed in a foster home. This care is headed by the Department of Human Services and paid for with state dollars.

CHINS and criminal youth before August 1 were placed in attendant care, a non-secure temporary shelter for the youth until they are brought home, or a court decision has been made for them. Attendant care is headed by law enforcement and funded through federal dollars.

The DHS passed a law that now requires CHINS be placed in shelter care, but the DHS will not cover the first 24 hours of their stay.

“I’m not with the Department of Human Services, I can’t speak to their reasoning behind that,” said Jahner. “We certainly have been working with them to say, hey, next session it would be great if you could budget for all shelter care dollars, including the first 24 hours.”

Minot Police Chief John Klug said Youthworks, the state’s youth shelter provider, sent the police department an email saying when CHINS are picked up by law enforcement and brought to its shelter facility, the Minot Police must pay for the first 24 hours of their stay.

“We’ve had these discussions often,” said Klug. “Then out of the blue we have to pay $450 for every youth we place. Part of the problem is if we check them in, and three hours later the parent picks them up, they’re charging $225. So they’ll charge for 12 or 24 hours. You either pay $225 or $450. Doesn’t matter if they’re there 15 minutes, you’re going to pay $225 minimum for checking them in. And we’re getting to the point they’re probably going to be there longer than 12 hours, so we’re going to pay $450 every time. It’s frustrating.”

Members of the Elmer Jesme conference passed a draft of a resolution to be sent to the DHS, asking it to budget for the first 24 hours of the CHINS’ shelter care.

Jahner said even if the state funds the first 24 hours, it would not completely cover the new costs of the new law, as Youthworks will still have to take in a larger number of children now with CHINS being taken in. Jahner said out of 31 of the youth brought into attendant care last year, only six had criminal charges and would therefore be covered by attendant care. If those numbers stay the same in the future, that will add around 25 more children to shelter care every year.

Is the Dual Nomination Process Good for North Dakota?