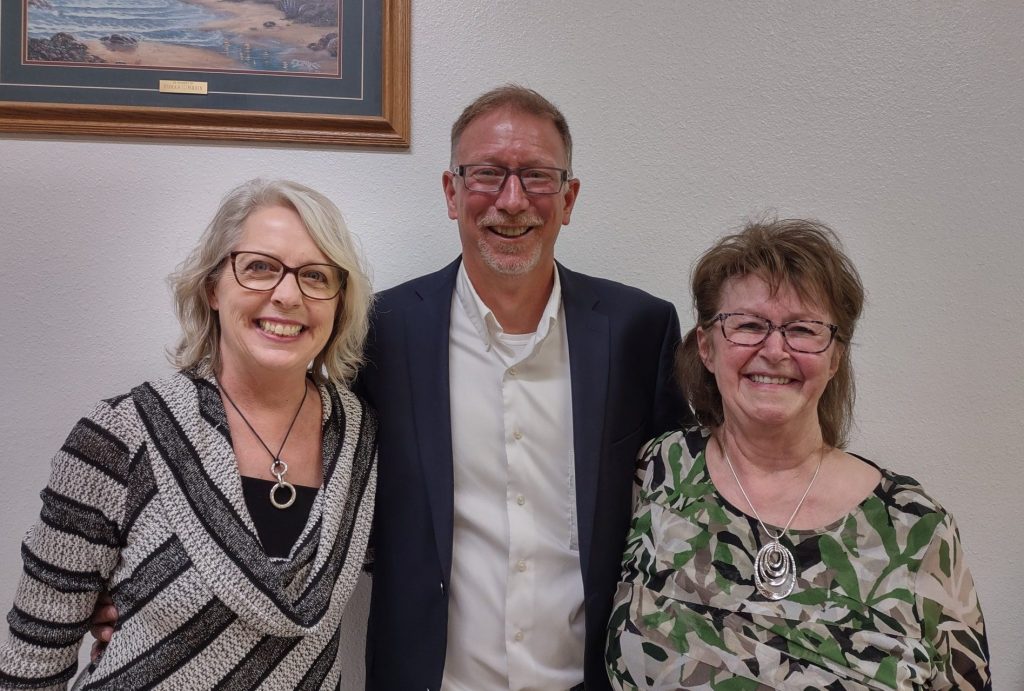 ROLLA — District 9 Republicans announced today they have endorsed Kent Weston for State Senate and Donna Henderson and Brenda Malo for State House. All three candidates were endorsed at the district convention held on April 6 and are officially launching a joint primary campaign for the June 14 election.

Kent Weston was raised in Sarles, North Dakota and attended NDSU where he received his degree in Agricultural Engineering. He worked for 3 years in Grand Forks at Nodak Rural Electric before coming back to the farm and starting his business, the Weston Seed House. Weston serves on many community boards including the Cavalier County Economic Development board, Calvin and Rock Lake school boards, church board, FFA board, and the Cypress township board. He served on the District 10 Republican Executive Committee, has been elected as a delegate to the Republican State Convention for many years, and has been active in the Republican party for over 20 years. Weston coached Jr. High basketball and served as a youth leader for more than 15 years. Weston also helped organize fundraising events for the youth to stock shelves and pack food hampers at the Turtle Mountain Food Pantry as well as events involving Shepherd’s Hill at the Crossroads.

“I have prayed about running for the Senate position for a long time and feel like this is what I am supposed to do,” Weston explained. “I believe in conservative family values and want to represent that in Bismarck. I would also like to provide a chance for the people of the Turtle Mountains to get good representation from the Republican party. Our party has a super majority in the legislature right now, and I know I can get things done that otherwise cannot.”

State House candidate Donna Henderson is running for sub-district 9B. Henderson has been very involved in her local district, serving on the Executive Committee for the last 12 years and many different positions on the state level of the Republican Party. She has attended the last 4 national conventions. Henderson spends time organizing meetings, dinners, fundraisers, and doing the hard work to help good candidates get elected to represent her community. She’s been married for 38 years and homeschooled their six children.

“I first got involved with legislative issues 17 years ago, and every legislative session since, I’ve spent time reviewing some of the proposed bills. I understand the process and will bring my experience to the table,” said Henderson. “I have networked with other like-minded citizens around the state – including coordinating emailing, talking to legislators, and testifying in person as much as I could. I was a registered lobbyist for 2 sessions and have helped with a bill from start to finish – drafting, getting sponsors, testifying, lobbying to get it passed in both houses, and getting the Governor’s signature.”

State House candidate Brenda Malo is running for sub-district 9A. Malo attended Dakota College in Bottineau for two years before moving to Minot State University where she received her degree in Elementary Education. She has worked part time as a Certified Nursing Assistant for 10 years and as a school teacher for 23 years. Malo is a member of Valley Lutheran Church, the Ladies Aid Society, and has served on the Native American Culture Club. She has lived in the Rolette area with her husband her entire life, raising their five daughters on their family ranch.

“I have a wide array of professional and personal experience,” said Malo. “My heart is full of love for our community and the people in it. I want to provide a voice for everyone – in rural areas, and in our towns and cities – and I pledge to be accessible and open to listening to others.”

"We're thrilled to have a full slate of candidates for this election cycle,” said District 9 Republican Chair Diane Arstein. “Rural North Dakota has unique challenges, and we're pleased to have conservative candidates that are enthusiastic about representing us. This is an exciting time! We encourage everyone to get involved."