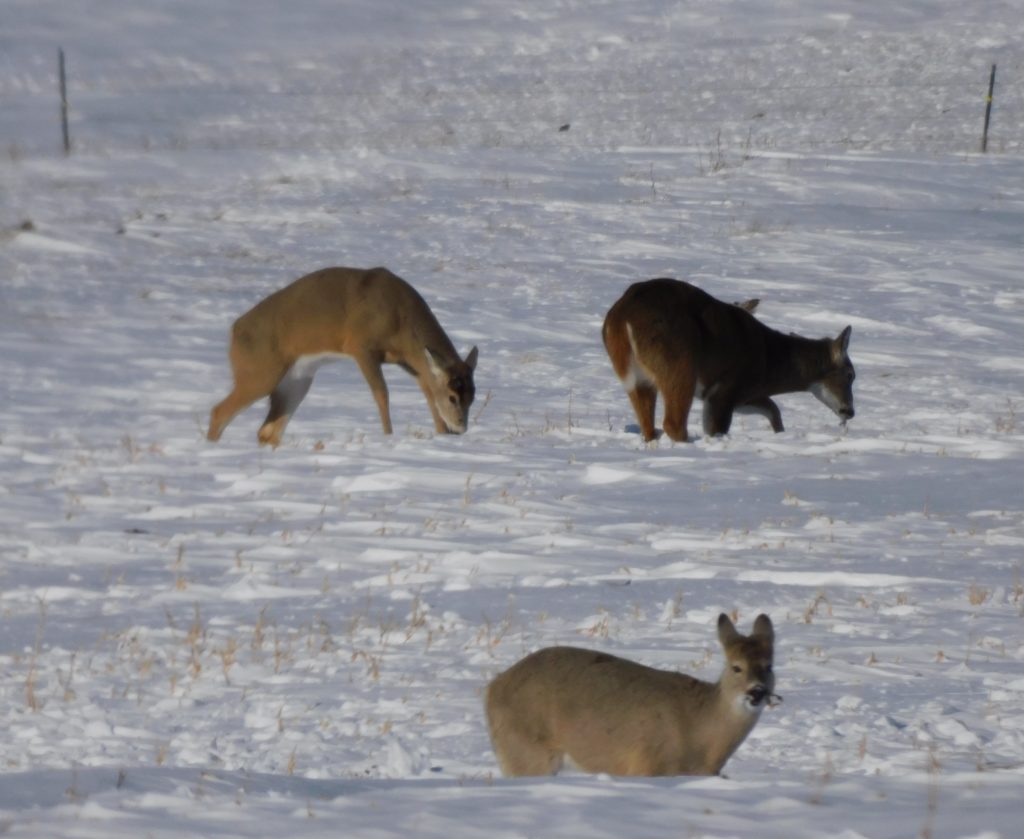 Struggle to Survive in North Dakota

BISMARCK — This winter has had its ups and downs with a mixture of somewhat pleasant days bracketed by stretches of sub-zero temperatures, snow, and wicked winds – pretty much a routine winter for North Dakota. But for wildlife it is much more serious than that. Winter can be a struggle for life or death.

“We’ve had extremes of temperature and conditions. One day it’s almost 40 and then 20 below. That’s a large change,” said Casey Anderson, North Dakota Game and Fish Department Wildlife Division chief. “It’s taxing on critters out there, more stressful on them.”

“We’ve had extremes of temperature and conditions. One day it’s almost 40 and then 20 below. That’s a large change."

Deer, upland game birds, and other wildlife are all at the mercy of the elements in wintertime in North Dakota. Cold temperatures require greater food consumption to create energy and body heat. Deep snow, or a crusted over snowpack, makes finding food difficult to impossible. Often animals expend more energy digging and foraging for food than they can acquire in the process.

There’s another issue too. Last summer’s drought left very little forage on the landscape. That is particularly challenging for the state’s deer herd.

“The most nutritious browse is growth from last year, and we didn’t have a lot,” stated Anderson.

Anderson said the amount of snow cover varies across the state with some areas much better than others for wildlife trying to get through the winter season. Much of the western part of the state has little to no snow cover and deer do not have to expend excessive energy just to eat. In other areas the situation is quite different.

“There’s deer depredation issues, getting into feed sources and things like that. There’s quite a bit of snow.” Anderson

“In the southeast they’ve got winter. It’s tougher down there,” said Anderson from his Bismarck office. “There’s deer depredation issues, getting into feed sources and things like that. There’s quite a bit of snow. The northeast has a good amount of snow as well.”

Snowpack in the Minot region is concerning too, and there’s several weeks of winter remaining. In sporadic areas where hilltops have begun to show some open ground due to warm days or high winds blowing away snowpack, allowing wildlife easier access to whatever food they can find, it's not always beneficial. Wildlife is drawn into the open, the very areas that are the most exposed to chilling winds.

While the state’s white-tailed and mule deer face a battle for survival through the winter months, upland game birds do as well, namely sharptailed grouse, Hungarian partridge, and ring-necked pheasants.

“Grouse do very well almost no matter what the winter is,” stated Anderson. “They are a native bird and built for it. They cope with cold temperatures. Pheasants and partridge are not native birds. They struggle more, especially with snow on the landscape.”


Anderson said the amount of snow on the ground is a reasonable indicator of how upland game birds are faring. Deep or crusted snow generally equates to more than usual winter mortality, with light or moderate snow cover having a less detrimental effect on upland game bird populations.

“The more snow, the harder it gets on pheasants and partridge. They’ve got to eat to stay warm,” said Anderson.

Adequate winter cover is necessary too, a place for wildlife to find protection from biting winds. Cattail sloughs provide a good escape from the elements for upland game birds, but even those areas can become problematic during a North Dakota winter.

“In the southeast, other areas as well, the cattails are full of snow or close to it,” stated Anderson, “And cattails are great winter cover if not covered with snow. We can’t do much to save what’s out there now, but folks have the opportunity to develop and preserve habitat. That’s how to maintain wildlife populations and help get animals out of the wind.”

Certain wintertime activities, noted Anderson, can also have a detrimental effect on wildlife. While it may be inadvertent, causing wildlife to move from their resting spots during winter adds additional stress to animals struggling to survive.

“We’ve come up with a lot of activities to keep busy and have fun in the winter in North Dakota, shed hunting and things like that,” explained Anderson. “We recommend waiting until the weather breaks or avoid those chosen areas that also might be winter habitat for some of our wildlife.”