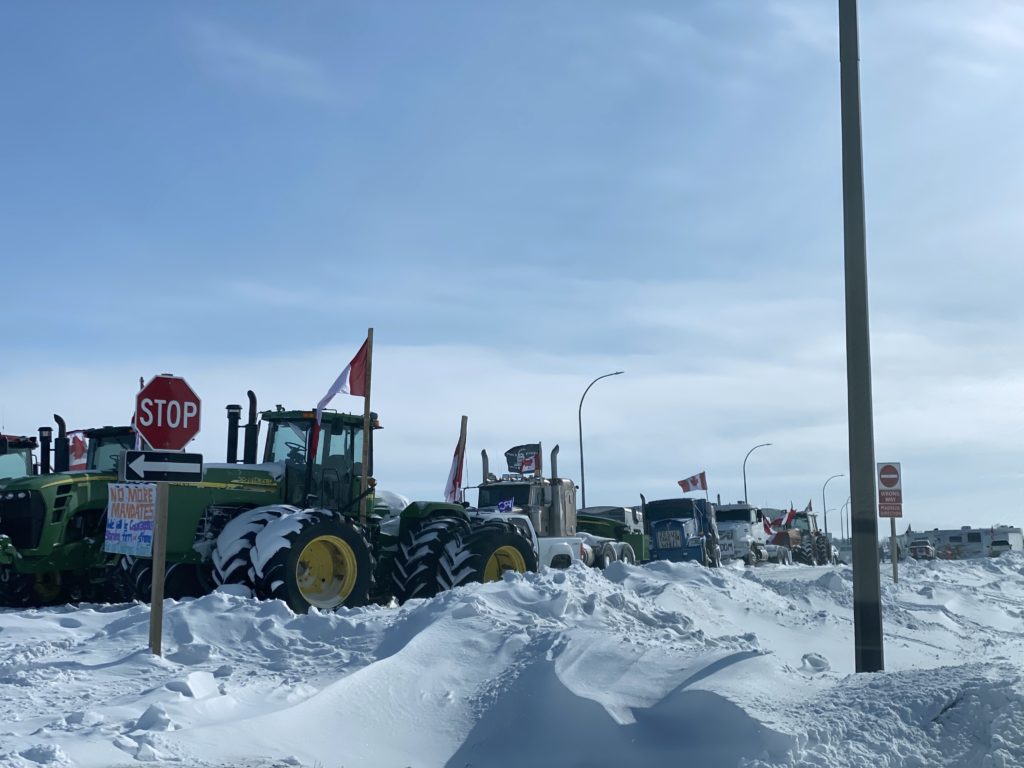 Now that the U.S./Canada border at Pembina, North Dakota and Emerson, Manitoba has been blockaded a week, motorists have no choice but to cross the border at alternative ports of entry.

If Canadians are coming into North Dakota from eastern Manitoba or vice versa, they are urged to cross at Neche, North Dakota and Gretna, Manitoba. Neche is where ND Highway 18 begins with the first community beyond Neche being Cavalier.

Otherwise the nearest preferred port on the Minnesota side is north of Roseau, at Sprague, Manitoba. Neither of those ports are 24-hour ports of entry. Two other Minnesota ports are available at Lancaster and Pine Creek, but Sprague is better equipped.

Although the blockade has been dispersed at the Detroit/Windsor port of entry, Simon Resch says nobody is going anywhere at Emerson, at least not now. Prime Minister Justin Trudeau met with all 10 provincial premiers Monday morning to discuss the blockades.

Sources in the Manitoba Legislature in Winnipeg say Trudeau did invoke the never-before-used Emergencies Act to handle the protests across the nation.

According to Resch, there hasn’t been any visual sign of that at the Emerson port, although that could change in the coming hours and days.

Resch owns and operates the duty-free shop at Emerson, and he tells The Dakotan he has had zero business in nearly a week because of the blockade.

“This is having impact on both sides of the border.”Simon Resch, Emerson Duty Free Shop owner

“I haven’t registered a sale since Thursday,” he said. “This is having impact on both sides of the border.”

The greatest issue with the blockade, according to Resch, is that U.S./Canada trade is being severely impacted because Pembina/Emerson is the fifth busiest port of entry on the Canadian border and the busiest port west of Detroit.

“Emerson is a strategic port west of Windsor (Detroit),” Resch said. “It’s the most significant in terms of value of trade. In most years, more goods are exchanged here than even the Vancouver to Seattle crossing.”

First, there is a convoy of trucks at the Manitoba Legislature. Resch said it’s similar to the protests in Ottawa, but it doesn’t have the magnitude as the Ottawa situation.

“The province and the city are discussing what to do about it,” he said.

Economically it is impacting Winnipeg because it is a major manufacturing point in Canada. Textiles, agriculture products, and manufacturing all left for the United States and up until the blockade began, 1,000 trucks were passing through the Emerson and Pembina port of entry on a daily basis.

But now, companies are using the alternative ports, which according to Resch, is certainly plugging up ND 18 when truckers cross at Neche and travel toward Cavalier and Grand Forks.

“For every hour a vehicle sits idle at a Canada Customs processing point, it’s costing $75 for each hour,” Resch said. “We see $700 billion in trade, and we can’t just shut that off.” He added the latest numbers are from Statistics Canada in 2019, so it may be more now because of the rise in fuel costs.


Not only has business at the duty free shop come to a screeching halt, but Resch says neither he nor the Royal Canadian Mounted Police know exactly who the leadership is for the convoy. He said there are some social media posts such as Winnipeg Alternative Media posting updated information, but that doesn’t narrow it down to who the actual leadership is.

“Here on the ground, we’re not sure who the leaders are,” he said. “The RCMP is working to identify who it is and they’re not sure if they should negotiate here or in Ottawa. Here in Canada, there’s a whole lot of confusion.”

He added, “If there would be a leader, I’d go out and talk to them and let them know it’s only my shop being impacted locally. Quite frankly, it (protest) has the air of a loose group of like-minded people with an undefined objective, and it’s going to wind up costing us both (U.S. and Canada) a lot.”

The duty-free shop owner says there isn’t any obvious impact to the community of Pembina other than one company called Mike’s Parcel Service which caters to Canadians shipping products into in the United States.

“From where we are here, I can see the highway all the way down to Pembina (4 miles),” Resch said. “There’s still a trickle of people, but as they approach the port of entry, they’re being turned around.”

“There’s still a trickle of people, but as they approach the port of entry, they’re being turned around.”Resch

Since the protest began at Emerson, there have been about 500 vehicles in and out overall, according to Resch. It started with long-haul trucks but now includes tractors, farm implements, RVs, pickup trucks, and others.

“This morning (Monday) there were about 75 vehicles out there,” he said.

According to Resch, nobody on the Canadian side is sure what’s going to happen as the protestors appear to be content right where they are right now. What he does know is his business has been severely impacted and he has conversations with his employees every day about the situation, and he’s doing everything in his power to make sure everyone at Emerson Duty Free keeps their jobs.

He said he is hoping there aren’t similar protests in the United States, because if it goes much beyond what is happening right now, both economies will be crippled.

“If the authorities and protestors don’t reconcile, I’ll have no choice but to start moving vehicles,” he said. “I hope and pray that doesn’t materialize.”