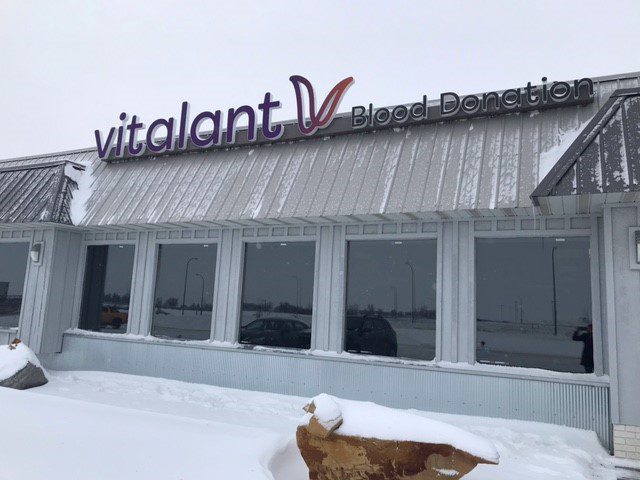 MINOT—Vitalant Blood Donation has been hit with new challenges over the past few years, much of it having to do with the overall effect of COVID-19.

Donor Recruiter for Northwest North Dakota Teresa Johnson said, “We have new challenges every year.” Johnson also explained COVID-19 caused them to shut down for a while, and people skipping their elective surgeries and cancer diagnoses has also affected the amount of blood currently needed. Supply is also lower because of fewer donations.

Additionally, the mobile blood drive became a challenge, because it was more difficult to get into schools, and many people at businesses were working from home. As for the businesses that have recovered, Johnson said where they used to get close to 100 employees to donate, they can now only get around 15.

“Our donations decrease also towards the end of the year." Teresa Johnson, Donor Recruiter for Northwest North Dakota


According to Johnson, the holidays can also be a challenging time to recruit blood donors. “People are busy with life, they’re traveling around, they’re doing their thing. It’s not very convenient to schedule a time, and to come in and donate blood,” Johnson explained. “Our donations decrease also towards the end of the year. We have an uptick of people having elective surgeries, maybe because they’ve met their deductibles. So, we have an increase in hospital activity as well.”

Johnson says the snow also causes many donation appointment cancellations during the winter.

Other reasons for a decrease in blood donations include misinformation about whether a person can give blood with or without a COVID-19 vaccine. Johnson says that vaccination status is irrelevant, and that people only need to make sure they are clear of COVID-19 symptoms for 14 consecutive days.

“Cancer doesn’t stop, we still need to continue with your treatment after your diagnosis, and so it’s really important to have blood on the shelves for those patients.” Johnson

A lot of the blood from Vitalant is given to cancer patients. “Cancer doesn’t stop, we still need to continue with your treatment after your diagnosis, and so it’s really important to have blood on the shelves for those patients,” said Johnson.

Other needs include, but are not limited to, surgeries, elective surgeries, trauma victims, mothers during childbirth, clotting disorders, burn victims, and premature babies. “When premature babies are born, they have about a cup of blood in their bodies, and it takes about a teaspoon of blood to save their life,” said Johnson. “When you do your donations, there’s 97 teaspoons in that bag.”

Johnson also talked about the importance of donating. “Very likely it’s going to be someone in your family or yourself. People don’t understand it until you’re at the hospital and you are there with someone who you care deeply about, and there’s a bag of blood hanging there and it says ‘volunteer donor’. Somebody gave an hour of their life to save your loved one’s life.”

Vitalant used to be known in North Dakota as United Blood Services until about three years ago. Across the country they had individual names, and not all of the systems talked to each other, so to unite they gave up their names and became Vitalant, which is Latin for “Full of Life,” according to Johnson. “The butterfly on the logo represents a second chance at life when you get a blood donation.”

Vitalant is the only provider for Northwestern North Dakota. The mobile blood drive is for blood recruiters, because it makes it more convenient for rural donors and prevents unnecessary travel time.

Blood donors should know that Vitalant will ask them questions about medications they take. Donors cannot be on medications such as antibiotics and blood thinners, which will need to be completed before the blood donation. Donors will also need a photo ID and will need to have eaten well and drink lots of water prior to the donation. The average person burns 600 calories during the time in which the blood is being drawn. Johnson says that being diabetic or taking antidepressants is not a problem, but donors cannot be pregnant.

The blood takes about 48 hours to go from the donation to the shelf. The test tubes get sent overnight to Vitalant’s testing facility in Arizona, where the blood is tested for medical problems such as Zika virus, HIV, and Hepatitis. After the test, the blood goes to quarantine in Fargo. After quarantine it can be sent to various hospitals in the area.

"There’s someone waiting in the hospital for the blood donation that you haven’t decided if you’re going to schedule an appointment for yet.”  Johnson

Johnson shared her passion for what she does, “I didn’t grow up to anticipate to be a vampire, this was a secondary career in my life, and it’s now kind of my passion. I don’t want to hit you over the head and drag you in. I want you to come in freely knowing that you understand the importance of giving this wonderful gift of life, that we all can give for free. There’s someone waiting in the hospital for the blood donation that you haven’t decided if you’re going to schedule an appointment for yet.”