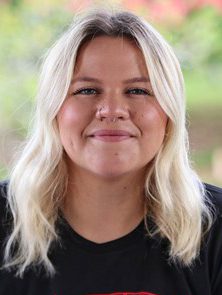 MINOT – The Beaver softball program has found its new leader. Minot State’s Director of Athletics, Kevin Forde, announced today that the Beavers have hired former University of Hawaii at Hilo assistant coach and player Bailey Gaspar as the new head coach for Minot State’s program.
“I feel a bunch of emotions: Excited, energized, blessed, and grateful, but mostly I feel honored to be a part of Beaver Nation,” said Gaspar, who will begin her duties with the Beavers on August 20. Gaspar replaces Nat Wagner who resigned on July 1 to spend more time with his family.
“I’d like to say thank you to everyone in the athletic department and the school administration for giving me the opportunity to be a part of Minot State University and the community of Minot.”
Gaspar most recently spent the past year as an assistant coach with the Vulcans in Hawaii, her second stint as a coach at Hawaii at Hilo as she also worked as a student coach after completing her collegiate eligibility while finishing her degree.
“We are thrilled that Bailey has accepted our offer to lead our softball program,” Forde said. “Bailey has a bright future in the game of softball, and Minot State University is a great match for what she brings to the table. I look forward to watching our softball program thrive with our new head coach.”
A 2018 graduate from Hawaii at Hilo with a Bachelor’s degree in Business Administration, Gaspar was a standout on the field and a true leader off the diamond as she was the President of the Vulcans’ Student Athlete Advisory Committee (SAAC) and of the Pac West Conference SAAC, while also earning PacWest All-Conference honors three times, All-Region honors three times, was a two-time All-American, and named UH-Hilo’s Female Athlete of the Year.
As a senior with the Vulcans, she hit .404 and led UH-Hilo with 15 home runs and 54 RBIs, both single-season records.
After finishing her career playing on the diamond, and spending a semester as a student coach, Gaspar moved to Arizona where she taught first grade and coached high school and club softball before rejoining the Vulcans as an assistant last summer.
“I believe that I bring a lot to Minot State University, whether that be my college career, my coaching, or my extensive knowledge of the game,” Gaspar said.
“There are two things in particular that I think are ‘special,’” she added. The first would be my age, I believe that being a younger coach who not too long ago was in these players’ shoes is going to be very beneficial for the team. I know how they feel and what they think because I was there just a few years ago. This is going to allow me to build strong relationships and better relate and understand the girls.
“The next is that having Polynesian lineage and playing collegiate ball in Hawaii has very much shaped me into the coach I am today,” Gaspar added. “There is a word in the Hawaiian language, ‘Imua’ which means to ‘move forward.’ We will move forward with strength towards our goals, and we are always better together, this is something that will be preached day in and day out. I’m excited to implement this into the team and integrate it into the culture.”
Gaspar takes over a program that went 28-20 this past spring, the Beavers sixth consecutive winning season, and a team that was No. 2 in the nation in total stolen bases in 2022 with a new single-season team record of 165.
And the Beavers graduate just three players from that team in Trinity Valentine, Zoya Robbins, and Rianna Aasen. That will be a great benefit to the new Beavers coach.
“Looking at the current roster, there is a lot of versatility on the team,” she said. “I’m looking forward to getting out on the field and to start working with the girls. There will definitely be a mixture of speed, power-hitting, and pitching and defense, but I truly believe that defense can win or lose a game. Enhancing the players’ defensive fundamentals will be a top priority this fall, as well as strengthening the team’s softball IQ.”
Strengthening the team’s defense and building softball IQ will be two immediate goals Gaspar looks to accomplish, along with building a solid team camaraderie.
“My immediate goal for the team is to build and enhance the connections, trust, and respect within the players and coaches,” she said. “This will be the most important aspect of being successful this year and for years to come.
“While we all want to win, I truly believe that getting the team to buy in to the expectations and culture that myself and (assistant) coach (Chelsea) Holli (Holliday) bring will be vital.”