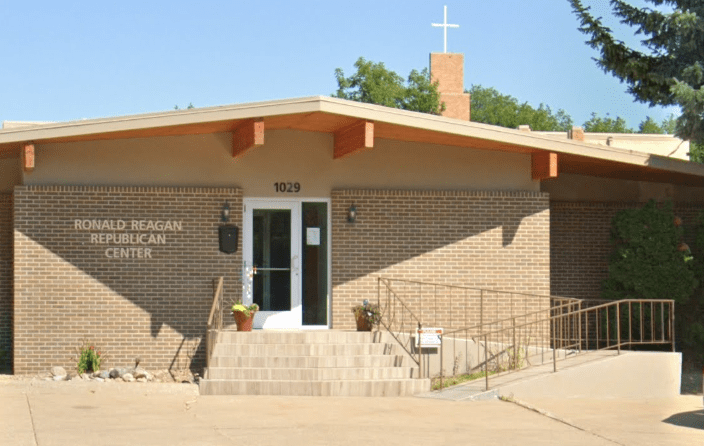 NDGOP Headquarters building in Bismarck. The party's state committee will meet on Saturday, Dec. 18, and will discuss some proposed amendments to party bylaws [Photo: Google Maps]

NDGOP Headquarters building in Bismarck. The party's state committee will meet on Saturday, Dec. 18, and will discuss some proposed amendments to party bylaws [Photo: Google Maps]

BISMARCK—If you’re a North Dakota resident who typically avoids articles about political squabbling, the subject of this article may affect you far more than you realize.

Perhaps the most controversial of these amendments would require potential GOP candidates to pay thousands of dollars in fees to the party simply in order to be an eligible candidate [see inset below]. The lowest of these proposed fees, to run for National Committeeman or Committeewoman, is $1,000. Fees increase from there up to $5,000 in the congressional and gubernatorial races.

Underwood farmer/rancher Bob Wheeler blasted the idea of these fees. “This is bribery, this is blackmail,” said Wheeler. “You have to pay them to run. This is not the way this country was ever set up to run from day one.”

Jared Hendrix, GOP chair of District 38, Minot, took a softer but no less critical view of this proposed amendment. “When we raise these sorts of bars [to candidacy] especially on the fees, it does contribute to the idea that we’re making involvement in politics and the quality of a good candidate about money more so than about other things,” Hendrix explained.

GOP District 1 chair Eric Nelson, one of the sponsors of this proposed amendment, said he would not be able to speak on the topic until later Friday evening, after the publication of this article.

"Every average citizen should care a lot about what happens at the state committee level because of the power that the [Republican] party has."Jared Hendrix, GOP Chair, Dis. 38, Minot

Another aspect of this proposed amendment seeks to increase the requirement of obtaining signatures from 5 GOP district chairs to 20. Hendrix clarified, “[The party does] have a right to set these standards if we want to, but I personally don’t like the idea of such a high bar. I think 5 [district chairs] is fine.” He added, “You can get a good cross-section of the state with 5.”

District 7 chair and Region IV chair Claus Lembke, Bismarck, countered that idea, saying, “It doesn’t really hurt anything. In the past, it was so easy to get five signatures, you ended up with some candidates who were not truly Republican.”

When asked to clarify what it meant to be truly Republican, Lembke explained, “There should be some kind of record of activity that they have been involved.”

He also added that there should be more checking into someone’s background. Lembke stated that when he himself was a candidate for office years ago, “Nobody asked me if I was a citizen or not.” Lembke believes that with the need to get 20 district chair signatures, maybe someone will know a little more about a potential candidate’s background. Perhaps even a criminal background check could be conducted, although Lembke did not necessarily think that was needed.

"In the past, it was so easy to get five signatures, you ended up with some candidates who were not truly Republican."Claus Lembke, GOP Chair, Dis. 7 and Region IV, Bismarck

Wheeler expressed frustration and disdain with how this amendment connects to other recent events. ““If everybody starts tying everything together with what the legislature did with Mike Lefor’s bill by allowing the state party chairman, Perrie Schafer, to fill executive committee chair positions in the interim, that led up to this.”

Wheeler was referring to HB 1513 sponsored by Rep. Mike Lefor, R-Dis. 37, Dickinson, during this year’s November special session. HB 1513 states, among other things, “After redistricting of the legislative assembly becomes effective, the state party chair may appoint a temporary district party organization chair in any newly established district….”

What’s the impact? According to Wheeler, “[Schafer] has stacked the deck going into Saturday’s meeting. He got rid of conservative voices.”

Wheeler continued, “Why is it that our elected officials, the members of the House, the members of the Senate, maintain and retain their elected positions [after the redistricting]…but it was imperative that they remove the executive committee from those districts? If you got redistricted out, you couldn’t be in your position anymore, but your reps and senators could? That doesn’t make any sense.”

Schafer responded to an email request for comment, indicating that he preferred not to comment now. Schafer wrote, “Once the committee decide the direction of the NDGOP on Saturday, I’d be happy to sit down and to clarify what was decided.”

"The party is shrinking, and the more we do to crush and to tighten down on the grass roots, the more it's going to die." Hendrix

Other potential changes to be considered on Saturday involve instituting a code of conduct within the party, moving the NDGOP convention to after the primary election, and removing the Young Republicans and the North Dakota College Republicans as voting members of the state committee. If the NDGOP adopts such measures, Hendrix sees a lot of potential to damage the long-term viability of the Republican party in the state.

Regarding the suggested code of conduct, Hendrix was even more critical. “When the people are looking for us to lead on the policies that affect our families and we’re squabbling over some code of conduct, it seems ridiculous,” Hendrix said. “The whole thing is a colossal waste of time.”

The state GOP committee meets on Saturday, Dec. 18, in Bismarck to decide these and other matters. As a meeting of a private organization, the meeting is closed to the public.

23,000 Airmen and Guardians Unvaccinated as Deadline for Guard and Reserve Passes