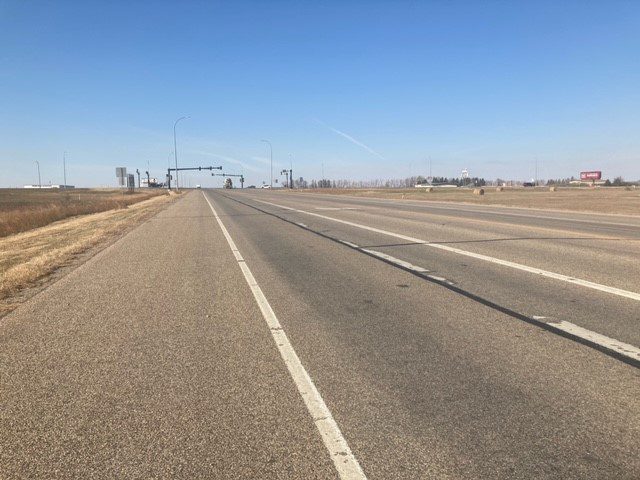 Intersection of Minot’s northeast bypass and U.S. Highway 83, where county commissioners voted to reduce the speed from 65 mph to 55 mph from the intersection to three quarters of a mile down the bypass going east. (Photo: Lydia Hoverson/The Dakotan)

Intersection of Minot’s northeast bypass and U.S. Highway 83, where county commissioners voted to reduce the speed from 65 mph to 55 mph from the intersection to three quarters of a mile down the bypass going east. (Photo: Lydia Hoverson/The Dakotan)

Both areas will be reduced from a speed limit of 65 mph to 55 mph. The first one is on the northeast bypass of Minot that connects to U.S. Highway 83.

Larsen said it makes sense for vehicles to reduce their speed since they will have to stop at the light anyway, and the intersection is too rough to go through it at 65 mph.

The second area is county road 14 and 17 west of Minot and the new Trinity Hospital. The reduction would start before the first curve coming west to east on county road 14, through the second curve until it hits the current speed of 40 mph around 30th Street Southwest. County road 17 will be 55 mph starting at the top of the hill by the pistol range to the intersection of county roads 17 and 14.

“Both of these areas are areas where we’ve had additional growth and development,” said Larson of both the northeast and southwest speed reductions. “Traffic volumes are a little higher.”

“I got some calls on this,” said Commissioner Howard Anderson. “I agree with this change. The people I visited with on county road 17 would like a sign at the top of that hill that says no jake brakes. It’s creating a noise issue in that neighborhood.”

Larsen responded saying he doesn’t know if the county has that authority since it doesn’t have a noise ordinance, but he will research it.

“The City of Minot I’d assume has it in town,” said Larsen. “I’d have to verify.”

Larsen and other commissioners were concerned that some trucks may need to use jake brakes coming down the hill. Sheriff Robert Roed confirmed that it is something the county cannot enforce.

“If we can do something, fine, if we can’t, that’s the way it is,” said Anderson.

Commissioner Shelley Weppler was concerned over the speed reduction due to possible bypass construction by the county roads.

“I see changes coming in this, and I’m not ready to do it right now,” said Chairman Jim Rostad. “But I see your point and why you’re coming before us, so I don’t think you’re unreasonable for trying to plan ahead.”

The motion passed with only Rostad voting against the speed reductions.