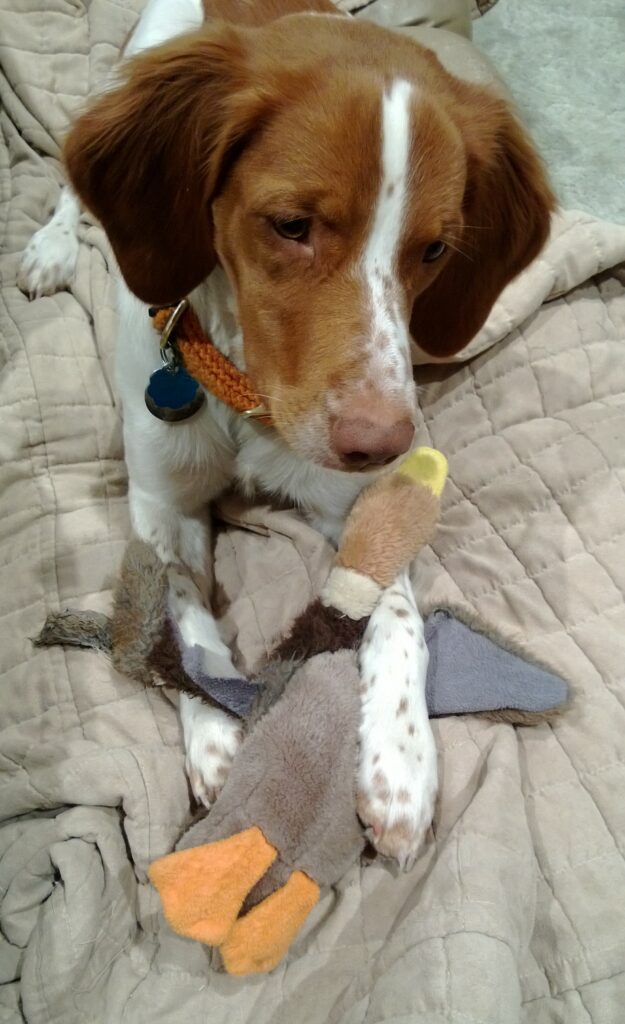 As a puppy Garnet – now the middle of the three family Hunting Maniacs – spent time pondering ducks and duck hunting, even if it meant snuggling with a “Stuffy Duck”. (Photo: Patricia Stockdill/The Dakotan)

As a puppy Garnet – now the middle of the three family Hunting Maniacs – spent time pondering ducks and duck hunting, even if it meant snuggling with a “Stuffy Duck”. (Photo: Patricia Stockdill/The Dakotan)

As waterfowl season enters full swing, an array of ponderings filter in and out of one’s mind:

Granted, sometimes those ponderings might be because of an abundance of time when the only thing moving are gentle breezes waving slough grass and a 10-week-old Brittany on her first waterfowl (AKA anything that she can get into her mouth) hunt. But regardless, there are times on a waterfowl hunt when musings float through one’s mind:

For example, what does a duck really think about when it sees those battery-operated decoys with spinning wings? Is it something like, “Hey, there’s George, I think I’ll stop in for a cup of coffee and…oh, wait, bad idea…”

What thoughts enter a duck’s mind when they realize the decoys they just landed in don’t quack back at them? On top of that, they just seem, well, they just seem really anti-social and rigid.

How many types of camouflage is it humanly possible to design? And does a duck recognize that if a hunter is wearing Mossy Oak® Shadow Grass®, Delta Hunter Marsh™, or Realtree Max-4®, they’re a serious waterfowler and it’s in the duck’s best interest to avoid that person?

Or does a duck think that if someone is wearing King’s Snow® Shadow or Seclusion 3D® Open Country while lying alongside a wetland or in a field laden with plastic decoys that they’re not a serious duck hunter and it would be totally safe to dive in for lunch?

How disappointed are ducks when they realize that someone who is a really good duck caller isn’t a real duck after all?

When a duck quacks or a goose honks as it flies away after a hunter misses, does that quacking or honking translate into “na, naa, na-nana” in English?

Why do waders always get holes and leak?

And speaking of waders, why are the feet always either way too big or way too small?

More importantly, has any human ever perfected the fine art of walking in waders without feeling as if they’re going to belly-flop into the water?

Does everyone wearing waders feel as if they’re dressed like Dizzy the Clown without his red nose and cutesy hat?

Do teal read waterfowl regulations? Is that why so many of them leave North Dakota so early in September? Seriously, it doesn’t matter if they’re green-winged or blue-winged, they know and understand regulations.

Recognizing that it’s the hunter’s responsibility and one should never shoot at anything they can’t properly identify, why – when the average waterfowl hunter isn’t an expert waterfowl biologist –does North Dakota’s duck season open early enough in September so that a vast majority of ducks are still brown?

Do hunters in southern Mississippi and Central Flyway states realize that most of their ducks come from the Prairie Pothole Region, which includes a large slice of North Dakota?

Why does the dog always want to sit on my lap in the waterfowl blind only after they’ve waded through the yuckiest, smelliest mud and muck along the entire shoreline after retrieving a duck?

Does anyone besides my dog hunt coots, snipe, and mergansers?

Speaking of dogs, why does my dog like to catch coots as they scoot across the water? That’s speaking not about the puppy who finally gave up eating everything and is zonked out sleeping on one’s lap, it’s speaking of the Senior Hunting Maniac who entertains whether waterfowl or upland hunting.

How many hunters ever had a duck or goose land on them after they shot it? Is that the perfect revenge or what?

And finally, if you’re a duck or goose hunter, have you joined a waterfowl or wildlife conservation organization? If not, why not?

On to Nationals for Young Artist