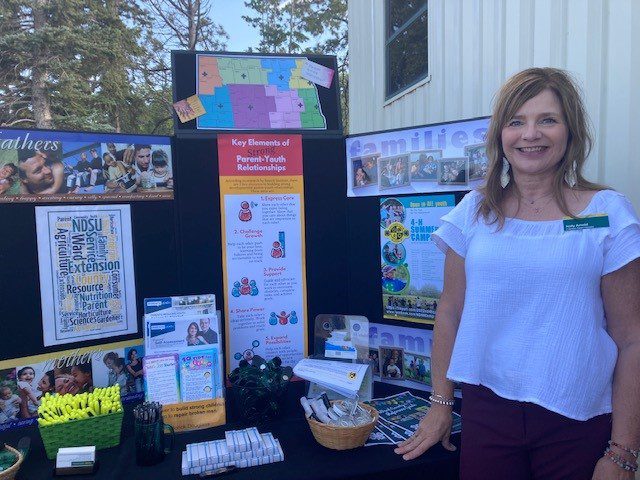 MINOT – There are many opinions on the best way to raise children, and one center shared its opinions, saying they are science-based.

Most funding comes from the Department of Human Services, says Arnold, and then run through North Dakota State University. Arnold said it also gets funding from the county. The center reports to all the governing entities that fund the center.

“We have the regular extension agents that most people are familiar with,” said Arnold. “We have a 4-H person, we have an agriculture and natural resource person. That’s what most people think of as extension.”

Arnold said a lot of the parent classes are science and research based, as the center provides surveys for the parents taking the class.

“What did you think before this class, after,” said Arnold. “What do you plan to do differently now that you’ve seen this information? People come in and say, ‘Oh yes, I totally understand child development.’ And then they take the class they might say, ‘Ok now I think I’m at a six.’ So it actually looks like they did worse. Then we ask, ‘Before you took this class how well do you think you understood it?’ Now they can say, ‘Oh, I was probably a three, now I feel like I’m a seven.’”

Every year Arnold said the research shows significant improvement for the parents who take the class.

“I’m yelling less, I’m enjoying my kids more, are some of the things parents will put on the survey,” said Arnold.

The curriculum that is used for the parent classes must be evidence based, according to Arnold, and approved through the Department of Human Services. Most of the evidence comes from the surveys, though there have been some from NDSU’s in-house studies. The curriculums also have their own research that come with them.

Those who take these classes vary from families simply wishing to learn more, foster care parents in which these classes can count as their training hours for foster care, and in some rare cases, those who are court-mandated to take parent-training classes.

“It’s absolutely for anyone,” said Arnold.

Arnold said she herself is a parent of two adults but has been teaching since they were very young and has learned a lot herself.

The curriculum is also for parents at different stages, including those who haven’t had a child yet. There is also a curriculum for parents of infants, toddlers, school age, and teenagers. Some classes have been online due to COVID-19, though there are still in-person classes, and every one of them has a teacher.

Arnold said teaching the classes is her favorite part of her job. She also said every year the numbers of attendance to the trainings go up.

“You’re always going to have things you wish you did differently,” said Arnold. “Maybe you were really confident with a four year old but then they turn 10. Same kid, different things going on. A lot of our curriculum focuses on child development.”

Arnold said a big part of parenting is remembering the child’s brain is still growing.

“Discipline means to teach. The better we understand that, the better we can empathize with our kids,” said Arnold. “And the better we can choose the most positive ways of discipline. When you’re wondering why your child feels like dumping every container, maybe that’s what they’re needing to do.”

Arnold said a lot of parents see more of the greatness in their kids and enjoy them more after taking these classes.

Arnold doesn’t believe there is a wrong way to teach kids, though the center teaches only positive discipline and does not recommend punishment or any physical discipline.

“It’s anything that doesn’t leave emotional scars or physical marks,” said Arnold. “Punishment, we see, as punitive, or leaving those marks and those memories that aren’t helpful. We focus on conversation, direction. In North Dakota you are allowed to spank, as long as it doesn’t leave a mark, you don’t use an object, it’s not on the face. But what are we teaching our kids if we choose to discipline in those means?”

However, Arnold does believe boundaries are good for children, as well as holding them accountable.

Arnold responded to the question of whether a child may be too young to understand positive discipline, saying parents may have to simply remove their child from the situation.

“Maybe they just can’t handle right now that there’s a puppy in the house,” said Arnold. “Maybe they don’t know how to treat the puppy well and we just have to remove the child from the puppy.”

Arnold said letting children make decisions that they are capable of is healthy for them, saying maybe they can’t choose whether or not they have to eat vegetables, but parents could let their children choose which vegetables they want to eat. She also said making children participate in coming up with guidelines for the family, and other projects such as planting a garden, is good for them and makes them more likely to appreciate the results.

“Children, especially toddlers, love to have power,” said Arnold. “So let’s give them the power of decision-making that’s appropriate for a two year old. Do you want to read one or two books? Do you want to put your sock on your left foot first or your right foot first? All of this may sound silly, but parents will come back and say their two year old is more willing to work with them.”

Though some decisions may not be appropriate for children so young, according to Arnold.

“You can say, ok you’ve made decisions all day, now I’m making the decision, and it’s bedtime,” Arnold explained. “Don’t give 10 year old decisions to a four year old.”

For teenagers, Arnold said instead of setting a concrete curfew for every night, it is better to ask them what they think would be a good time to come home and come to a reasonable conclusion.

“We want them to be part of the process,” said Arnold. “They might come up with a crazy time like 4 a.m., and you can say I’m thinking not so much.”

Arnold said many parents have a difficult time following some of these techniques because they wish to protect their children, so they may wish to pay for their child’s mistake by paying a certain bill or calling the teacher about their failed test and sending them to their room, as opposed to the consequence simply being allowing them to pay the bill or fail the test.

“We want our kids to be successful and not fail or get hurt,” Arnold explained. “But at the same time, are we helping them to launch? What are the things we can let go of a little bit, as appropriate, to give them more responsibility.”

One technique may not work for all parents, and parents are able to pick and choose which curriculum they wish to take and what techniques to follow, says Arnold.

“It’s all about relationship,” said Arnold. “Your relationship with your child is the most important piece, where you love them to pieces no matter what. You’re the best cheerleader they have, you’re the biggest advocate, you’re their biggest teacher, you’re that hero they look up to. They’re looking to us to set those boundaries and those limits. If I kind of get off track at all, I know this person who is connected to me will take care of me.”

Christmas in the Park Returns to Oak Park