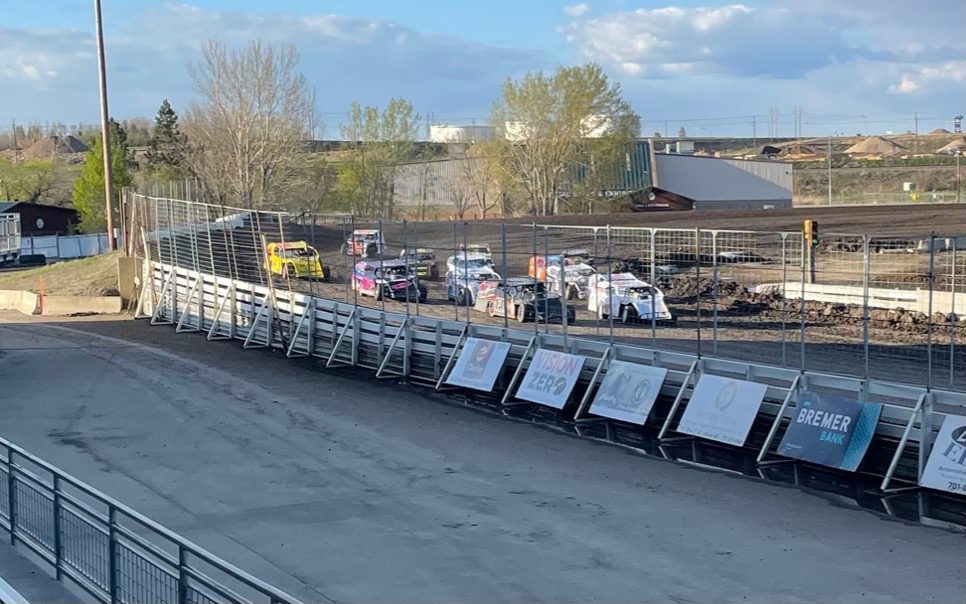 MINOT — It only took three weeks, but mother nature decided to play along and let the NODAK Speedway kick off the 2022 dirt racing season Sunday.

All five of the speedways regular car classes and drivers took to the track. The April blizzard and recent rain made track preparation extremely difficult for track volunteers. Going into the night, it was clear that it was not going to be the typical smooth racing surface that everyone is accustomed to. The ground moisture made the track soft, especially on the bottom lane where a lot of the moisture settled.

The racers didn’t let the unpredictable track prevent them from having some exciting racing for the opening night crowd, starting with the first feature race, the IMCA Stock Cars.

Will Scheresky took advantage of a great start gaining an eight tenth of a second advantage during the first two laps. Lap three had the first caution of the race as Brett Woznicki had a tire go flat sending him to the hot pits and out of the race. The very next lap, Jason Kniffen cut a tire down and brought out the second caution. Scheresky and Joren Boyce battled over the next four laps before Boyce passed Sheresky and went go onto win the race by a two second margin. Rob Stenvold finished second, and Jason Berg rounded out the top three.

IMCA SportMods took to the track next. After an early spin by Dirk Miller, last season's championship contenders Erik Laudenschlager and Darren Medler battled side by side through the middle laps. Medler’s race had an early end as he drove a little too aggressive into turn one and slide over the banking. The ensuing restart spread the field out with Laudenschlager winning, Robby Rosselli second and Chad Strachen third.

The IMCA Modifieds were up next. Wayne Johnson started the race strong leading the first three laps but coming out of turn four, the front suspension on Johnson’s car broke causing a spin. Tyler Wagner, who was catching Johnson prior to the caution, took advantage on the restart and ran away from the field. The battle for second between Chris Tuchscherer and Marcus Tomlinson was the one to watch before Tomlinson had to bow out with engine issues. Wagner went on to win with Tuchscherer second and Mike Tomlinson third.

The Sport Compacts respected the unpredictable track as they stuck to the single high groove that worked all night. Race winner Marantz Hanshew had an excellent jump out of the gate and left Nicholas Hoffman, Alex Thompson, and Aiden Wagner to battle for the remaing spots in the top three. Hoffman and Thompson finished in second and third respectively.

That left the final race of the night, the IMCA Hobby Stocks. After two hard contact crashes causing five cars to not finish, everyone voted to play the safe card and count the laps down until about five to go. That’s when Kyler Satran made a couple quality passes to take the lead and the win. Brett Green and Jay Loughman rounded out the top three.

NODAK Speedway continues the season with a Memorial Day Doubleheader Weekend with races set for Sunday and Monday. Green Flag flies at 6 p.m. both nights.