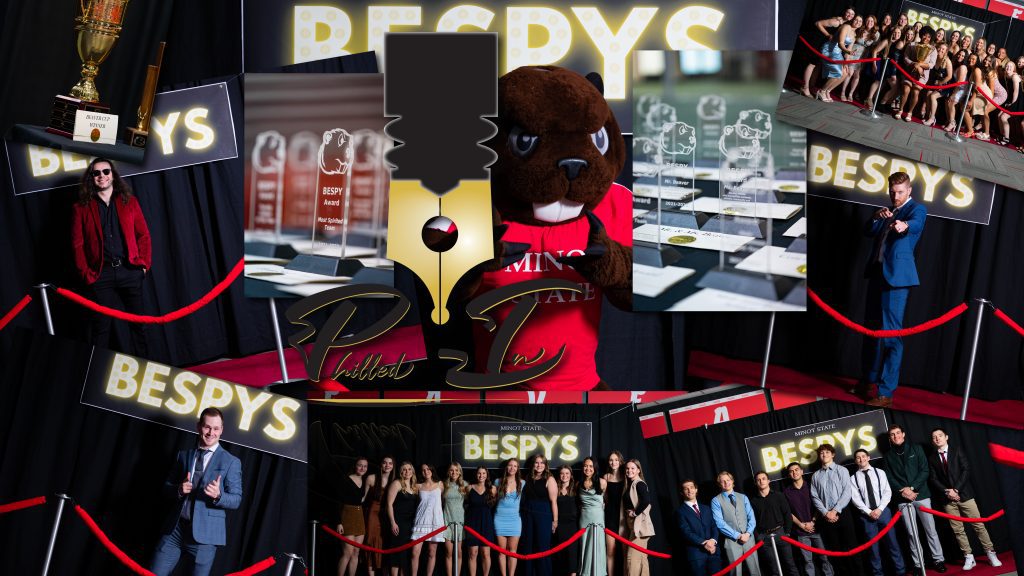 MINOT — The theme for the night on May 2 was Dress to Impress for Minot State Athletics. Athletes walked the red carpet and got their photo taken by athletics photographer Sean Arbaut. Filling up the MSU Dome floor was every team on campus dressed up for the annual BESPYS, the Beaver Athletics award show.

The event is planned and coordinated by the Student Athlete Advisory Committee (SAAC) with one goal in mind, honoring and recognizing all the amazing accomplishments by the athletes at Minot State.

Planning began back at the beginning of the semester. The event included photoshoots on the red carpet before the award show began. Then the athletes all gathered in their seats for the beginning of the award show. Hosted by Director of Marketing, Cole Krueger. Throughout the night Krueger called up members of SAAC to come and announce the awards. Side by side one male SAAC member and one female SAAC member would stand on stage and describe what each award was and its criteria, who the nominees were, and the winner of the award. As the athlete walked to the stage to be given their BESPY award the SAAC members would read off their accomplishments that led to their peers voting them for the award.

The voting process for each award was a multistep process that took place over the past couple months. It began with each SAAC member taking time to discuss with their team the criteria for every award. Then as a team they would nominate one member from their team for each award. Then all the SAAC members came together and listed off who their team's nominee is and why they believed they deserved the award.

After group discussion each award was narrowed down to the finalist. There were anywhere from two to four finalists for each award depending on which award it was. Once the finalists were chosen each SAAC member cast a secret ballot for who they believed was most deserving of the award. They were revealed this past Tuesday to the rest of Beaver Athletics.

There were a wide range of awards at this year's BESPYS. Awards included both team awards and individual awards as well as both on and off the field/court/ice awards. This year’s BESPYS award winners were:


Some highlights from the award winners include RJ Martinez and Amber Stevahn tying for Top Performance of the Year. Martinez had a complete game shutout against Upper Iowa in which he broke the school record for strikeouts in a game with 13. Hitting a late shot to propel the Beavers over Wayne State, Stevahn eclipsed 2000 career points at MSU and finished the game with 25 points total. No one is more synonymous with MSU Women’s Soccer these past several years than Sofia Lewis. Holding almost every record there is at Minot State, Lewis is the all-time leading scorer, assists leader, and most games played in a Beaver uniform. These are just a few of the many reasons her peers chose her as the Female Athlete of the Year.


In his short time at Minot State, Male Athlete of the Year Leif Nelson, has broken records in discus, javelin, and high jump.

Wyatt Waselenchuk earned coach of the year in his first year at the helm of Men’s Beaver Hockey, leading the team to a 31-3 record.


Women’s Ice Hockey earned team of the year with the ACHA playoff run, making it all the way to the semifinals of the tournament.

Beaver Cup and Team Spirit award go hand in hand. The Beaver Cup is a competition between all athletic programs to see which team can go out to support their fellow Beavers the most. Points are awarded towards Beaver Cup based off the number of games a team attends and how much representation they have.


Softball had the most points by far, you could see them at pretty much every sporting event on campus and rightfully they were awarded Team Spirit to go along with their Beaver Cup victory.

The night was wrapped up with a social featuring food and good conversation. It was a perfect night to honor the successes of the athletes at Minot State and give them an opportunity to step away from their gameday uniform and enjoy a night of formal attire.


The athletic season has come to a close. Philled In will return next fall ready to kick off the 2022-2023 atheltic season.