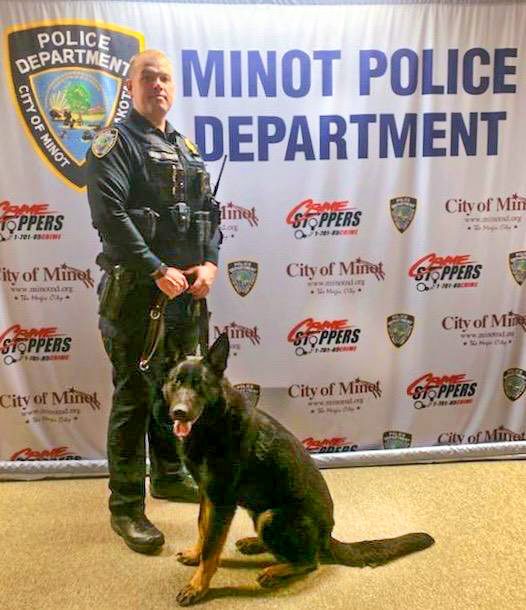 MINOT — The Minot Police have a new canine and are in the process of training him to replace their older dog.

Dave Chapman, administrative lieutenant of the Minot Police Department and the one responsible for the canine team, says that the previous canine, Lois, was “nearing the end of her working life.” Cyrus, the new dog, will be one of two narcotic dogs, Lois having been such previously.

Not only was Lois getting old, but her handler, the one who trained and maintained her, was also moving onto a different career, according to Chapman.

Lieutenant Chapman had been a handler himself and says handlers can usually tell if a K-9 is ready for retirement.

As far as the new dog goes, Chapman says the department usually looks for the highest quality dog they can reasonably find. “We went with one we know very well the reputation of. What this gentleman does is he goes over to Europe, and he’s got connections on the eastern block of Europe. Specifically for this one it was Slovakia, and he managed to pick us a real, real good dog. Very social, very high workability, curious, good with different environments.”

Cyrus and his handler, Officer Dan Batteiager, will be in school for 12 weeks, and then after graduation will be certified with a nationally recognized entity. “We use NPCA, National Police Canine Association. They will test the handler and the dog, their ability for obedience, for odor detection. They’ll put narcotics in hidden locations, and the dog and the handler will have to find where that odor is located,” Chapman explained.

The NPCA also tests the dog’s tracking ability, says Chapman. “Somebody will basically walk across the grass and roadways, and that dog will have to be able to track and find either the person or the hidden object there.”

“He’ll be tested in what we call ‘article search’. What that is, is if you have your keys in your hand, and you throw them off in the grass somewhere, the dog should be able to find that,” said Chapman.

The canines are also trained for criminal apprehension.

“This is what we call ‘bite work.’ So if we need to send the dog to subdue a running suspect or a hidden suspect, where it’s not safe for us to do it, that’s the other aspect that they test in,” Chapman explained.

The two dogs that are currently working, Mace and Caspian, as well as Cyrus, are all dual-purpose dogs.

“You’re going to have a patrol side, which is the tracking, searching of buildings, the criminal apprehension and stuff like that. And then there’s the odor side, which is narcotics in this case. [Cyrus] is going to get both those disciplines,” said Chapman.

Cyrus and Mace will both be narcotics dogs, while Caspian is the explosives dog, with all of them being patrol dogs, making them dual-purpose.

Chapman says that Lois is about 9 or 10 years old, while Mace and Caspian are in the middle of their career around 5 years old. “They’re right at their prime working life.”

Cyrus, along with most of the new dogs the department gets, is around 15 months old.

Though the Minot City Council approved an amendment to the Police Department’s annual budget for the purchase of the canine, training, and equipment, the police are “trying to do a community funded dog, as far as Cyrus goes, so we are accepting donations,” says Chapman.

“The whole process is quite expensive. We’re looking at funding everything from the dog to the training to the equipment, with the car and everything, [as] each dog needs a car. The one that we have for him is on its last legs. So we’re trying to fund pretty much everything, and the total bill for that with everything included is about $100,000, so it’s pretty spendy. We are definitely accepting donations.” Chapman says the dog itself costs around $10,500, and with the training, hotel for the handler, and food, it will end up being around $30,000 to $35,000.

The car and equipment with cost around $55,000 according to Chapman. “It’s absolutely stunning what it costs,” he expressed.

Lieutenant Chapman explained how useful the dogs are to them, “We find a lot of drugs with our two drug dogs. We catch quite a few bad guys. One of the homicides last year, [our bomb dog] was called out to look for a cellphone he had thrown into a field. Nobody knew exactly where or anything. [The dog] had that thing found within about five minutes. Their sense of smell is amazing.”

“A lot of it is just training them how we want them to use their natural skills. Every dog is a little bit different, they all have the same hunting abilities, but every one reacts just a little bit differently to things. You can tell when they first start coming to an odor that they’re looking for, and you’re able to recognize that,” Chapman said.

Police dogs can also be trained to find computer components, such as flash drives according to Chapman. “What that’s useful in, is child pornography cases, where you’ve got somebody that’s hiding that. They’re not very big, so you can hide them pretty much anywhere, and a dog will be able to come in and smell the components in that."

Chapman also explained the connection between the handler and dog, “What your emotions are go right down the leash to the dog. So if I’m nervous, the dog’s gonna feel that. It’s like a wire that connects the two brains.”