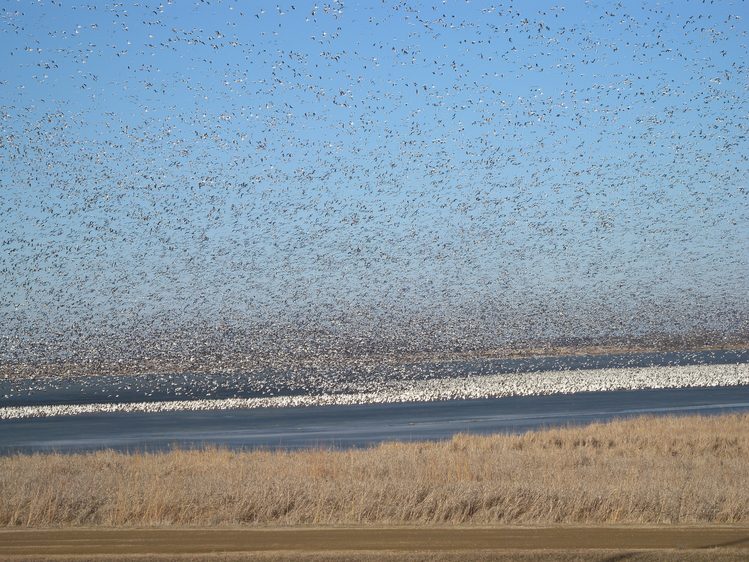 Oops, just in case anyone missed it, North Dakota is already almost a week into hunting season.

And, oh by the way, another hunting season closes in a few days.

The state’s hardy tree squirrel hunters have to hang it up for another year on Feb. 28.

However, that doesn’t mean hunters have to wait until March 12 for the spring crow season to open until they can hunt (yes, that’s correct, there is a legal crow season in the Great State of North Dakota).

Plus, it doesn’t mean hunters have to wait until spring turkey season opens April 9 – if they applied and got drawn for a tag.

Granted, scattered splotches of snowdrifts and snow still dot frozen ground across the prairie landscape and lakes and wetlands look like large, amazing ice cubes. Plus, any sheet water from melting snow or ice is likely to harden rapidly because this is North Dakota and winter can last well into… well, it can last into April and May depending on Mother Nature.

However, that being said, should any brave, hardy light goose decide it wants to test the elements and head north for an early start on Arctic nesting activity, hunters can head afield to try to find them.

It’s likely any and all light geese – snows, blues, and Ross’s – are still languishing along their southern wintering grounds. They’re soaking up the sun and warmth, feeding, and putting on weight in preparation for their lengthy 1,500-mile journey.

Depending on when Mother Nature decides to shift from winter mode to spring, light geese probably won’t be anywhere in the state until enough snow melts, allowing for sheet water in fields and open water in wetlands for birds to feed and rest.

Don’t expect that anytime soon, although this is North Dakota, and anything can happen.

There is a reason the Conservation Order opens so early: It allows ample time for harvest opportunities should any light geese be in the state. That philosophy also applies to the fact that it doesn’t end until May 10. By that time, a vast majority have long settled into their Arctic summer homes, although some juveniles may have missed the note to board their flight.

North Dakota isn’t a large player in harvest totals during the light goose conservation order largely because of weather. When they start making their northward move, light geese tend to languish more so in South Dakota, resting on sheet water covered fields and feeding.

When it comes to North Dakota, the state typically needs a snow line or adverse weather and shallow sheet water in fields and temporary wetlands to hold them, so they can rest. Otherwise, most tend to view North Dakota from the air. The peak light goose migration across the state centers around April 1 – a week on either side of that date.

Another reason North Dakota isn’t a major player in harvest is that it can be challenging to get into position to harvest spring birds. For starters, there are thousands – tens of thousands and more – of them flying in large flocks. That’s a whole lot of eyes in the air. Those adults are pretty suspicious when it comes to identifying potential dangers even when flying high in the sky.

Plus, muddy fields abound by the time they’re moving through in late March and early April. Access is difficult, and it’s imperative to get permission – even if fields aren’t posted, whether electronically or with physical signs – because landowners don’t appreciate muddy fields torn up by hunters.

Another challenge in the spring is light geese tend to move rapidly once they’re near North Dakota. They typically need a storm to hold them in the state after staging in South Dakota. Otherwise, they can be in one location one day and well into Canada by daybreak if they decide to take flight.

However, generous regulations during the light goose conservation order allow for a larger harvest and make it a little easier to be successful. It’s still worth checking out for more information on license requirements, regulations, and other details.

Besides, it’s a wondrous sight and sound as they journey over the state – and worth watching.

Go to the N.D. Game and Fish Department website for details.