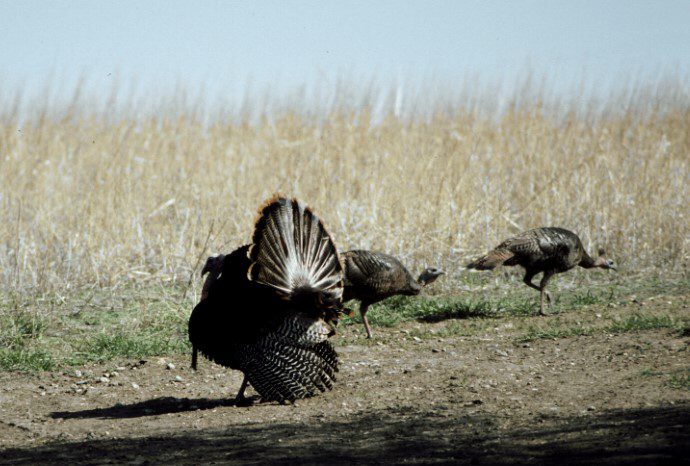 For all of the love one glitzy import gets from North Dakota hunters, it almost seems unjust another import doesn’t garner the same amount of affection and attention.

Especially considering that less respected import here in North Dakota is so highly revered by hunters virtually everywhere else.

Admittedly, it seemed North Dakota missed the memo that wild turkeys are, indeed an amazing bird. It’s almost as if it took awhile for hunters to realize they’re not only delicious, they’re equally amazing to hunt - especially in the spring.

And upon closer inspection, they’re just as stunningly beautiful as the other glitzy, revered import - the wily rooster ringneck pheasant.

Yup, it took some time for that concept to catch on, although perhaps it’s understandable.

Just like North Dakota’s Kingpin of Upland Game Birds –those pheasants - wild turkeys aren’t native to the state. They haven’t been around as long as pheasants, either.

N.D. Game and Fish Department records point to 1910 as the first year the state stocked pheasants when 75 birds housed at a state hatchery near the North Dakota-Canadian border were released.

It took a few decades, however, before turkeys found themselves on the North Dakota landscape. Granted, a few unofficial stocking attempts occurred in the 1930s and 1940s when some folks seemed to take it upon themselves to bring turkeys to the state.

However, it was the Izaak Walton League Missouri Slope Chapter that truly claims honors for the first official release. They paid $1.75 each for eggs purchased from Pennsylvania, working with interested farmers to raise them back in 1951. By 1957, they released 1,331 Eastern wild turkeys along the Heart River in southwestern North Dakota and in southeastern parts of the state.

Six hens and two tom Merriam’s turkeys were released in far southwestern Slope County of North Dakota in a unique pine forest area. A joint effort of the Izaak Walton League and Game and Fish Department, the birds came in a swap with the State of New Mexico – six wild turkeys for 23 sharp-tailed grouse.

Fast-forward a couple of decades and by 1958 the Game and Fish Department was proposing its first official wild turkey season for the fall.

That’s why North Dakota’s turkey season was traditionally in the fall. The concept of a spring season didn’t catch on until 1976.

Unfortunately for wild turkey enthusiasts of the time it was huge flop, in large part because landowners in the open areas weren’t keen on the idea of a spring turkey season. They voiced their displeasure, posting their land and closing access in many areas.

That put the brakes on a spring turkey season until 1982. By that time, landowner sentiment evolved and hunters found access to hunting turkeys in the spring easier to obtain. Ironically, for a bird that didn’t get much hunting respect for several years, North Dakota only allows residents to hunt during the spring season.

It still took a few years for spring turkey season to catch on among hunters. But now that it’s been 40 years, spring turkey season can be appreciated for what it truly is: A chance to get outdoors and hunt after a long winter. A chance to test one’s calling skills against a bird that in most other states is as revered as any big game animal. A chance to relax in the woods and listen to the sounds of wildlife, especially when migrating birds are in full flight.

True, it’s also an opportunity to collect more wood ticks than what a person thought could be humanly possible. And sometimes it’s a chance to bag bird in a spring snowstorm that suddenly pops up.

Yet it’s also a time to appreciate a grand iridescent bird, one that deserves those same accolades the other glitzy iridescent bird gets. So hale to the wild turkey. Give it some love and the much deserved respect it deserves – and receives from those who love to test wits with a wickedly smart tom.

And don’t forget to apply on the Game and Fish Department website, (gf.nd.gov) by Feb. 16.

*Strutting tom and turkeys: A tom turkey struts while other turkeys seem more interested in meandering for food. Spring turkey hunting applications are due Feb. 16.